The RE-M3 "Mainsail" Liquid Fuel Engine is one of the heaviest and most powerful large-diameter engines among the stock parts. It is usually used to provide thrust for larger rockets and lower stages. It is typically fueled by large diameter liquid fuel tanks like the Rockomax X200-32 Fuel Tank. Prior to version 0.23.5 it was the largest engine, as well as the one with the highest thrust. Those titles, however, are now held by the S3 KS-25x4 Engine Cluster.

The Mainsail is a common choice for lifting large stacks of liquid fuel tanks into orbit and beyond, or propelling large heavy lift vehicles. As of 1.0.4[outdated], this is one of four size 2 engines. The thrust vectoring also gives it good pitch and yaw control, greatly easing first stage stability, though care must be taken to not allow S.A.S. to tear the ship apart. The thrust-to-weight ratio of this engine is excellent. The specific impulse is also fairly good, though it can still consume large amounts of fuel.

The high thrust of this engine combined with thrust vectoring can destroy poorly built rockets in the middle of ascents. Throttling down or limiting the gimbaling is often recommended. Prior to version 0.22 the Mainsail would tend to quickly explode from overheating when run on maximum throttle and placed under a Rockomax Jumbo-64 Fuel Tank. Though this has been resolved, other parts may encounter the same bug. Placing a small strut or fuel tank between the engine and the Jumbo-64 will mitigate this. 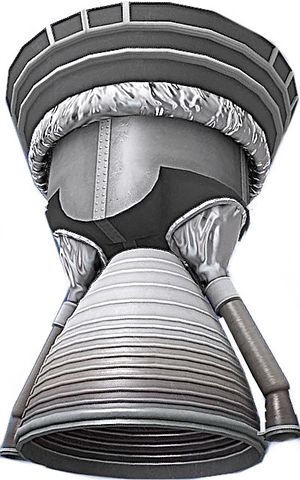