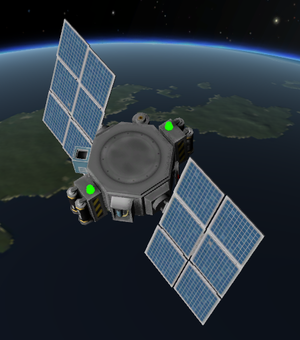 All panels, except for the OX-STAT Photovoltaic Panels and the OX-STAT-XL Photovoltaic Panels, need to be extended using the right-click menu (Extend Panels option, and for the retraction choose the Retract Panels) or action groups (using the Toggle Panels command, the player can extend and retract several solar panels with a single keystroke) before they will generate energy. Unpacked solar panels are very fragile and will easily break off when colliding or experiencing atmospheric drag, so they must be retracted during liftoff, aerobraking, or atmospheric re-entry. Note that, as of version 1.0, the unshielded OX-4 series solar panels can't be retracted once deployed, so they are not suited for aerobraking missions.

The energy output of solar panels depends on their orientation to Kerbol. Except for the surface-mounted OX-STAT Photovoltaic Panels (and its larger brother OX-STAT-XL Photovoltaic Panels, all panels will automatically pivot around one axis to face the sun as much as possible. Reorienting a vessel to manually aim the panels at the sun and eliminate shadows cast on them will also improve power generation.

If an unmanned craft has no electric charge available, it becomes entirely nonfunctional and no parts may be operated (notably, this includes motorized solar panels which might have allowed it to recover). However, it can still be saved if another craft docks to it and supplies it with electricity (using either a docking port or an Advanced Grabbing Unit) or if a kerbonaut on EVA manually extends the solar panels. This is why it is good design practice to always include at least one surface mount solar panel or a RTG.