The Tracking Station is the building located at the Kerbal Space Center on Kerbin dedicated to the access, observation, cancellation and recovery of all currently active missions, including splashed-down or landed craft and debris. It does not include crashed or otherwise ended missions. Any celestial body can also be observed at the Tracking Station. 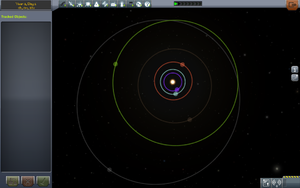 The tracking station's main display is similar to the map view, with the main addition being a list on the left of the screen displaying every mission (craft, kerbonaut on EVA or Extend-o-matic Series A1 Deployable Flag) in the game. At the top of the screen is a button that timewarps to the next morning, and to the right of that is a set of buttons used to filter different types of missions/craft, such as Probes, Landers and Ships; by default, everything except for debris is shown. A single type can be selected using the right mouse button, and other types can be added or removed from the selection using the left mouse button. Information and physical statistics about the currently selected object are available through the buttons in the lower right like while in map view; craft have a crew manifest (if crewed), while bodies have a short description.

Notes: structure biomes must be in contact with a craft to be accessed. To access the Dishes, touch them on the side facing the Hub.