), your semi-major axis from your central body (

may be found on their respective pages.

Returning to our case, the higher your orbit, the less gravity you'll feel from Kerbin, so the slower you'll need to go to be in a circular orbit. Determine the proper speed for your altitude at apoapsis or periapsis either by hand, by calculator, or by table. You'll probably want to watch your altimeter as you near one of the critical points, remember the altitude, determine your desired speed, and make the correction on your next pass. If you want to "round out" your orbit from apoapsis, you need to speed up to avoid falling back down to periapsis. Point your craft in the exact direction of travel (use the chartreuse yellow circular indicator on the Navball to line up), and apply thrust until you've gained enough speed. To round out an orbit from periapsis, you need to slow down to avoid climbing back up to apoapsis. Point your craft in the opposite direction of travel (indicated on the Navball by a chartreuse yellow circle with an "X" through it), and apply thrust until you have slowed to the speed indicated by the table. You should then be in an orbit that is very close to circular! Depending on how eccentric your initial orbit was, you may need to make a large correction on your first pass followed by a small correction on a subsequent pass to get very stable.

For fine adjustments to your orbit, adding a set of RCS thrusters to your craft helps immensely. Additionally, you can see the current trajectory (and read periapsis and apoapsis altitudes) by switching to the Map view (M key).

The most efficient way to de-orbit from any altitude is to initiate a transfer orbit with a periapsis below 69076 m, the edge of Kerbin's atmosphere. Note that the upper atmosphere is very thin so if you do not want to wait for several orbits of aerobraking, aim for under 35000 m and thicker air. As you approach periapsis, the atmospheric drag will start to slow your craft and eventually it can no longer maintain orbit. 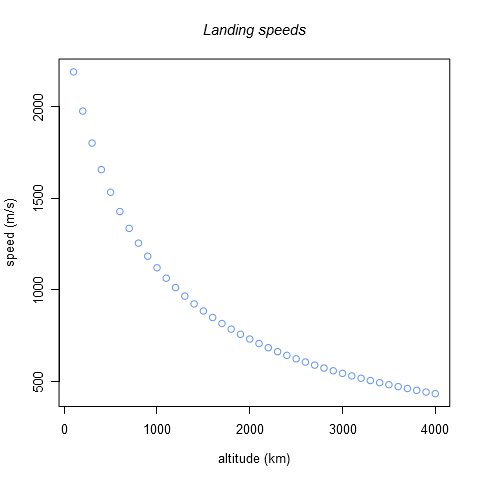 Note: The atmosphere once had a sharp cutoff at 34.5 km, but now extends to approximately 69 km. Below this altitude, your orbit will gradually decay. The decay becomes quite rapid below about 45 km. The orbital parameters below 69 km are provided for reference, but understand that you will not be able to maintain these orbits without regular corrections to counteract the atmospheric drag.