Tutorial:How to get to Jool 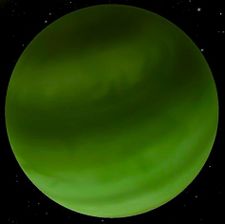 Jool. If you don't see this at some point during the tutorial, you've probably done it incorrectly.

Jool is the second most distant body in the Kerbol system, and one of the more time-consuming locations to reach. Getting to Jool is really the next step after Eve, Duna, and Dres, and is an attractive target due to its large atmosphere and complex moon system.

Additionally, you will need a good understanding of orbital mechanics (see Tutorials section), angles, possibly aerobraking and a lot of patience.

This rocket should be fully capable to reach Jool. To build this rocket, you will need at least 8,300 Delta-V. To save some Delta-V in your rocket, you could aerobrake around Jool or Laythe. Ideally, in Career mode, you should have a fully upgraded level 6 Technology tree to build this rocket. You could probably get away with a level 5 Technology tree but you will probably need to add more stages or more power to the bottom stage to make this design work.

This stage should have enough fuel to get into Jool orbit and to possibly travel around Jool's 5 moons. You can reduce the required fuel by aerobraking inside Jool's atmosphere, but it requires a heat shield on the top of the rocket. At a bare minimum, use a Rocketmax Jumbo-64 Fuel Tank (or multiple small tanks) and ether a RE-L10 "Poodle" Liquid Fuel Engine or a LV-N "Nerv" Atomic Rocket Motor on the end. 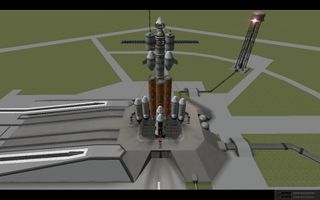 A rocket fully capable of reaching Jool and returning.

Here is my design (in the image to the right): Start with a MK1-2 Command Pod and stick a Rockomax Brand Decoupler under that. Next, put a Service Bay (2.5m) with whatever you want inside it (Science, batteries, etc...). Ether put a Rockomax X200-8 Fuel Tank or a Rockomax X200-16 Fuel Tank under the service bay. On both sides of the fuel tank and the service bay, stick 2 Rockomax X200-32 Fuel Tank with fuel lines going into the smaller fuel tank. For engines, ether use RE-L10 "Poodle" Liquid Fuel Engine or a LV-N "Nerv" Atomic Rocket Motor and stick it to the bottom of the small fuel tank. If you are going to aerobrake, stick a Heat Shield (10m) on top of the MK1-2 Command Pod. Remember to stick some parachutes, batteries and solar panels to power the reaction wheels.

The middle stage should be able to escape Kerbin's SOI and get an encounter with Jool. A Rockomax Jumbo-64 Fuel Tank will do for most small rockets but it depends on the size of your upper stage.

Put a Rockomax Brand Decoupler then a Rockomax X200-32 Fuel Tank under it. On ether side, put some Rockomax X200-16 Fuel Tank with fuel lines going into the big tank. Any medium engine will work just fine for this stage but I prefer to use a RE-I5 "Skipper" Liquid Fuel Engine instead. Put a pair of AV-R8 Winglet on each fuel tank.

This is the launcher stage that will get the rocket into orbit. Make sure you use a lot of Solid rocket booster and powerful engines. The size of your lower stage greatly depends on the size and mass of the middle and upper stages.

Put a Rockomax Brand Decoupler and then two Rockomax Jumbo-64 Fuel Tank under that. Put a RE-M3 "Mainsail" Liquid Engine under the fuel tanks and use four way symmetry to put the same build around the original fuel tanks (refer to the image above). Next, put some Hydraulic Detachment Manifold around the four fuel tanks (not the one in the middle). Use some LFB KR-1x2 "Twin-Boar" Liquid Fuel Engine in pairs of two on each Hydraulic Detachment Manifold. Use some AV-R8 Winglet and put them symmetrically on each booster. Put some TT18-A Launch Stability Enhancer on the boosters and make sure to use a lot of struts all over the ship.

The staging for the Jool rocket.

For staging of the ship, you can also refer to the image on the right.

The 8th stage fires the boosters and decouples the launch struts.

The 7th stage fires the decouplers attached to the boosters. (Optional: Add Sepratron I)

The 6th stage fires the main engines to the rocket.

The 5th stage decouples the main fuel tanks and the main engine.

The 1st stage decouples the upper stage for Kerbin landing.

The last stage fires the number of parachutes you want to include. 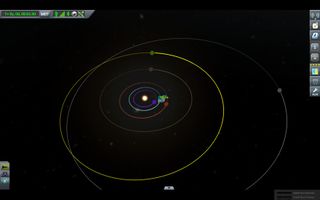 Jool should be ~90 degrees ahead of Kerbin.

While not absolutely essential, the easiest and fastest way to reach Jool from Kerbin is ensuring that they are properly aligned. Otherwise, you may spend a lot of time (possibly years) and fuel drifting until they happen to match up. To do so, check your map and make sure that Jool is in front of Kerbin in its orbit around Kerbol, and if you were to draw a line from Jool to Kerbol to Kerbin, it would form a ~90 degree angle.

Start with a normal launch from Kerbin by making a gravity turn at ~10km (or whatever you are familiar with). Get your apoapsis to ~70 to ~100km then make your orbital insertion. If you have extra fuel in your lower stage after your orbital insertion, make sure to save it for your interplanetary transfer.

Step 4 - Fly from Kerbin to Jool 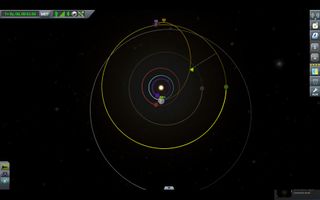 A successful transfer between Kerbin and Jool.

Once you are in orbit, and Kerbin and Jool are aligned properly, select Jool as your target, it makes things a lot easier. Next, make a maneuver node about 45 degrees past sunset. Then, pull out your prograde vector until the dotted yellow line leaves the Kerbin system and crosses Jool's orbit. If you have done these steps correctly, you should see two white arrows near each other, one pointing up and one pointing down. If you do not see these arrows, you might have to tweak your orbit a bit. Play with the prograde and retrograde vectors a bit until you see the arrows. If you get the two white arrows close enough to each other, you will get an encounter with Jool. If you cannot get an encounter, try moving your maneuver node around a little bit. Once you complete the burn, you will be on a course to Jool! 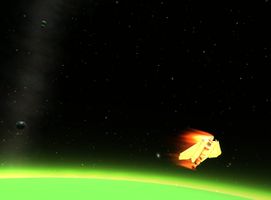 When you get into Jool's SOI, you basically have two options for getting into orbit.

1- Play it safe and burn retrograde at periapsis, but risk running out of fuel

2- Aerobrake, save some fuel but risk burning up in Jool's atmosphere

Option 1- When you arrive into Jool's SOI, make sure your periapsis is is above 200km. Simply point and burn retrograde at periapsis until you get into a stable orbit.

Option 2- A few days before you arrive in Jool's SOI, play with a maneuver node and get your periapsis under 200km, inside Jool's atmosphere. The height of the periapsis is totally up to you, but I recommend not to go under 160km. Once there, enter Jool's atmosphere pointing retrograde. Try to keep your ship as stable as possible and not flip around, or else you could burn up. Once you have exited the atmosphere, burn retrograde for a bit if you are not in a stable orbit.

A safer alternative to option two is to aerobrake in the orbit of Laythe, which is similar to Kerbin's atmosphere. Then just simply transfer to an orbit around Jool. This option does require more planning, and I will not be explaining how to do it.

Congratulations! You have now reached Jool! 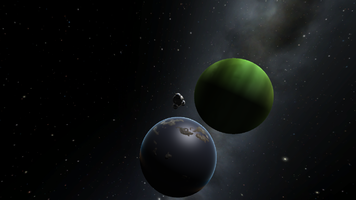 A view of Jool and Laythe from orbit.

Step 5.5 - Some Things to do After Reaching Orbit

Since it is not possible to land on Jool, here are some tasks that you could do in orbit.

- Try landing your ship one one of the moons

First, select Kerbin as your target. Next, wait until Kerbin is about 50 degrees behind Jool. Set up a maneuver node at about 45 degrees past sunrise. Then, pull out your prograde vector until the dotted yellow line leaves the Joolian system and crosses Kerbin's orbit. If you have done these steps correctly, you should see two white arrows near each other, one pointing up and one pointing down. If you do not see these arrows, you might have to tweak your orbit a bit. Play with the prograde and retrograde vectors a bit until you see the arrows. If you get the two white arrows close enough to each other, you will get an encounter with Kerbin. If you cannot get an encounter, try moving your maneuver node around a little bit. Once you complete the burn, you will be on a course back to Kerbin.

Other Ways to Reach Jool

You have now successfully done a mission to the Jool! Your next mission is to now go to Eeloo, the farthest planet in the Kerbol system. Or, you could also go to Moho, the one closest to the sun. It's your choice! I thank you for using this tutorial and wish you good luck on your journey through the Kerbol system. Bye!