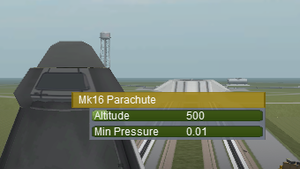 Tweakables are a system added in version 0.23 to set specific properties while in the Vehicle Assembly Building or Space Plane Hangar prior to launch. The major advantage is that these properties are stored with the craft scheme in the building, so they stay the same for every launch.

The following properties are changeable while building:

There are a lot of possible usages for tweakables.

Although tweakeables give a level of customization not possible before 0.23, some aspects of the spacecraft remain unchangeable for gameplay reasons like changing the thrust limiter for solid rocket boosters during flight. Some tweakables haven't been implemented like changing the output of engine alternators. There is also another technical limitation to tweakables that they only allow certain values. So it's not possible to have a thrust limiting value between 0 % and 5.5 %.