The Cove Launch site is a complex on Kerbin that is about 50 km away from the KSC. Once an aircraft or rover passes near this site, a message will display at the top of the screen indicating that spacecraft are now able to be launched from the site. No DLC is required to unlock this site as it was released free with the 1.12 update. The launch complex consists of a water tower, three fuel tanks, the launchpad, and three small structures. Although unconfirmed, these structures are likely for building small aircraft, for flight control, or even for recreation and living purposes! The launchpad's ramp is also partially submerged in the water allowing this area to be ideal for launching boats as well. This launch site, as suggested, is located in a cove that can be reached by following the long strip of beach to the left of the runway. 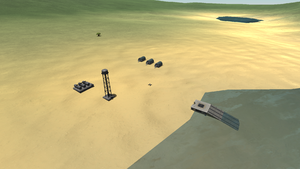 A rover driving past the Cove Launch Site.

You can only launch from Cove if you enable Allow other Launchsites in the Difficulty Settings. When enabled you can launch a rocket from the VAB via the dropdown menu under the Launch button. When you hover over it, a menu appears with available launch sites. Select the arrow next to Dessert Launch Site to launch from there.

How to select a launch site
Retrieved from "https://wiki.kerbalspaceprogram.com/index.php?title=Cove_Launch_Site&oldid=104266"
Categories: