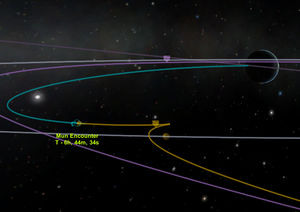 Upon arrival at an encounter node, the game switches the orbital reference of the craft to that of the encountered celestial body; an ideal moment to plan maneuvers to stabilize into an orbit. Orbits can be disturbed when time-warping across sphere of influence changes. To maintain a carefully planned orbit, the time warp should be slowed down to 1× as the ship approaches the sphere of influence change. It is recommended to not have a orbit cross encounters, unless you are planning on landing or interacting with the planet/moon.