It's not completely clear whether kerbals can only gain one set of experience per celestial body throughout their career, or one per mission (with no repeats). Say a kerbal goes and orbits the Mün one time. Fly by its two points, orbit is three, so they get three points. Can they do another fly by as a separate mission to get those two points? If they come back and land, do they only get two points for the landing mission? - Politas (talk) 00:12, 24 December 2014 (CST)

I'm not quite sure (and currently not able to verify this) but I'd say 'throughout their career'. My kerbals only get one XP for starting from Kerbin (or whatever that reason was (flying)) and not for each start (mission). — xZise [talk] 20:20, 24 December 2014 (CST)

I think the real question is how multiple different missions work. Say someone goes for a flight on Kerbin and is recovered, he gets 1 exp. That is pretty easy. Now say he goes on another mission into orbit around Kerbin. Does he get the full 2 exp, or just the difference of 1 exp, or since he already did Kerbin 0 exp? Also I think "flight" needs defining. How does one go for a "flight around an airless body? Being bellow a certain altitude? Being on a suborbital trajectory? If so does a hyperbolic suborbital trajectory work? Futrtrubl (talk) 19:24, 1 January 2015 (CST)

Experiments showed that only the highest score on a space body counts throughout whole career. It means that if you want to "pump" experience on Mün you will need only one "bus": it lands and then every kerbal should plant a flag. You could not "loose" any XP points (while keeping your kerbals alive :) ).Ksbes (talk)
That is not the real question: If the same Kerbal goes to orbit, they would get XP for flying around Kerbin and orbit Kerbin. As flying around Kerbin is done only the XP is added from orbiting. I think it's basically a long checklist and if one is done (aka flying around Kerbin) that is checked and the XP is granted. I'm not sure though about other bodies (will flying around Laythe 'replace' the flying around Kerbin?). But can't verify/test it currently. Also be aware that each Kerbal is treated differently. So if on your second (into orbit) mission another Kerbal was aboard with no flights at all, that Kerbal will get XP for flying AND orbiting. — xZise [talk] 13:27, 2 January 2015 (CST)

You lose the point. Each kerbal has his own XP points record for each space body (maybe including asteroids - need to check). The XP record for body is the highest (in points ) achivement for your kerbal he got so far. Total XP for Kerbal is sum of all records. So you cannot get XP for "flying AND orbiting" because orbiting "canceles" flying (and planting flag on Mun canceles any other achivements on it). And after second orbital flight both kerbals will have exactly the same number of XP points. That what I mean about "XP bus" - you need only lend on mun and plant a flag there to reach level 2. Then go to Minimus - and your week-ago-newbies are 3rd level space wolfs! — Preceding unsigned comment added by Ksbes (talk • contribs) 08:12, 3 January 2015‎ (UTC)

Well I wasn't talking to you but Futrtrub (hence I didn't indented it). I haven't done the calculations but if you say that only the highest 'record' for a body counts it's probably so. But it doesn't change in the end that when a Kerbal got that achievement it won't be awarded a second time in another mission (just the amount according to the values changes, because 'lower records' get ignored). — xZise [talk] 13:39, 3 January 2015 (CST)

I second that. Just did two flights with my S-203 and all newbies: Flight around KSC and recovering all 18 guys: +1 XP each. Flight into space and full orbit, afterwards landing & recovering: +1 XP each. So assuming the table is correct, only the highest achievement counts towards the score, all lower achievements are wiped. This means, you only get 2 points out of Kerbin, whatever you do. Need to check that against Mun, but all signs are as such. M3tal Warrior (talk) 09:35, 23 January 2015 (CST)

As I understand it the Kerbal gets the XP for a given achievement by multiplying the base value with the multiplier. So in theory orbiting Kerbin should result in 3 XP (1.5 · 2 XP). Now the description above the table says that you get 5 XP when planting a flag on the Mun although it would be 12.5 XP when it's actually base value multiplied by the multiplier. So I'm probably wrong. — xZise [talk] 09:06, 18 May 2015 (UTC)

No, the numbers in the chart are the correct value, I just did a flag on minmus exp for 6 points. At the top of the table is the base value for a set action (Base of 2.5 for flag plant). That number is multiplied by the planetary multiplier to get the value on X planet. This does exclude the ones worth nothing like Kerbin. To the average player the multiplier info is meaningless. Maybe mod makers that are making their own planets would use it to judge their own Exp values but that's about it. Maybe it needs clarifying. --Riccars (talk) 02:05, 25 May 2015 (UTC)

D'uh! I've overlooked the right most column. When you multiply 2.5 (the base value for planting a flag) with 2 (the multiplier for the Mun) you get 5 XP as written in the text above the table and the table itself. Only the left most table (fly by) doesn't make sense for Minmus (unless that is rounded up).
There are a few exceptions (nothing fly by of Kerbol and landing/planting a flag on Kerbin; flight and orbit around Kerbin are also different) but most of the values make sense then. — xZise [talk] 13:27, 25 May 2015 (UTC)

I discovered today that fly-by of Kerbol is possible and is worth 4 XP. To accomplish this you must plan a fly-by of another planet while you are still within the Kerbin SOI. That way both ends of your path lie within the SOI of a planet. The game counts this as a fly-by. See image: 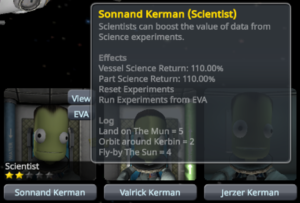