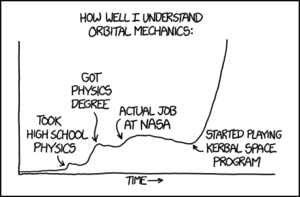 In the basic orbiting tutorial, you were introduced to the concept of orbiting, and basic orbit stabilization, as well as an orbital table to help you along. Now, what if you want an orbit that isn't on that table? What if you want to have an orbit with a specific period? That's where these formulae come in.

The relation between orbital speed and acceleration is given by the formula:

where a is the acceleration due to gravity, v is the horizontal speed, and r is the radius of orbit.

Of course, gravity varies depending on your distance from the planet, so we also need the following formula to determine a based on your altitude:

Now we have two expressions for a, so we set them on opposite sides of an equation and simplify:

From the basic mechanics formula:

We know v from the above, and d is simply the circumference of a circle with a radius equal to your orbital altitude plus the radius of Kerbin:

For this section it is assumed that the craft in question is orbiting a particular body and is a lot smaller than the body that it is orbiting. Other then in the general orbital equation and the energy equation, the orbits are assumed to be bounded orbits completely within the body's sphere of influence and no others. This section also assumes that classical physics applies in the game. All distances and radii are from the center of the body being orbited and the sea level radius of the body needs to be added to the altitude given in game to recover the values here. The section uses the standard gravitational parameter

is Newton's Gravitational Constant and

is the mass of the body that is being orbited. From here on out

will refer to the mass of the craft.

When the craft is orbiting a body, the distance between the craft and the body is given by the equation

is the angular momentum of the craft,

is the eccentricity of the orbit, and

is an angle parameter for the orbit.

at apoapsis or periapsis, and

the orbit is bounded and is an ellipse and when

the orbit is unbounded. At

the craft is at the periapsis and at

the craft is at the apoapsis. At periapsis,

The semimajor axis is

and the semiminor axis is

Given the results for

The energy for an object in orbit is

One should note that for bounded orbits, the energy is negative and for escape orbits, energy is non-negative.

The orbital period is

all at the single point in time the craft is at

The speed of the craft before the burn is

The speed of the craft after the burn is