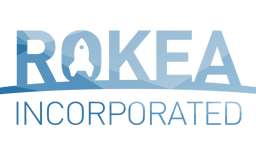 Rokea Inc produces electric lights and “vertical mobility enhancers” which are indistinguishable from ladders, because that's what they are. Now they also started producing engine plates and structural tubes

There has long been confusion and inconsistency in how to spell this company's name, and still is.

In version 0.24, in the configuration file for the agencies, the name is written in title case with no abbreviating period as “Rokea Inc”. However, in the config files for each of their products, their name is written fully capitalized with abbreviating period as “ROKEA Inc.”. Their company logo also seems to have it as “ROKEA”, though this may just be textual styling. Of note, the word “incorporated” is also fully capitalized in the logo but, unlike other references, it is not abbreviated.

Prior to this, the manufacturer of their parts was inconsistently listed either as RKEA Inc. or R�KEA Inc. where the first produced the lights and the latter the ladders. The second letter of the latter name was stored in the file in the following three bytes hexadecimally EF BF BD which corresponds with Unicode character FFFD16.

The company name might be a reference to the Swedish interior furnishings and decor company IKEA, but the additional fifth letter casts some doubt on the theory.

The following 23 pages are in this category, out of 23 total.