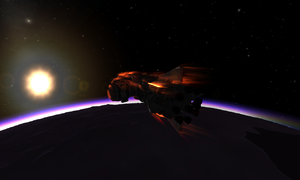 The Eve Effect is a phenomenon that affects craft entering the atmosphere of Eve at a near vertical angle. Drag will not be high enough to slow down the craft but will generate enough heat to damage your landing vehicle over the course of the fall, causing it to break up catastrophically. This is most common on Eve since it has an abrupt transition to thick atmosphere. but this does happen on Jool also. It happens on every celestial body with an atmosphere at high enough speeds and steep enough angles.