Eve is the second planet from Kerbol, the closest planet to Kerbin, and KSP's analogue for the planet Venus. It has one small moon: a captured asteroid called Gilly. It is especially notable for its extremely thick, dense atmosphere, which makes aerobraking and returning two of the most dangerous activities in the game. Additionally, Eve has the greatest surface gravity of all the planets, and the second highest escape velocity, second only to Jool. This makes it extremely hard to send missions there because of the Eve Effect.
A tutorial to get to Eve is available at the link.

The surface of Eve seems to looks not unlike that of Saturn's largest moon, Titan. It has several oceans, among which lie large, flat continents. The terrain has a few mountain peaks but mostly consists of rolling hills that resemble purple sand dunes. These are speckled with small boulders, no doubt worn down by Eve's pressure, temperature, and winds. Eve's surface is covered with craters. Eve's highest mountain range has a peak of 7526 m. 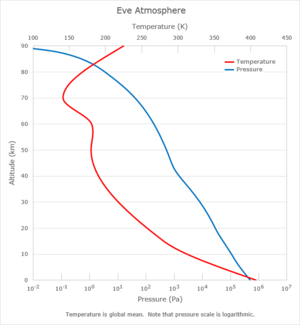 A (now-outdated) comparison of the atmospheres of Eve and Kerbin 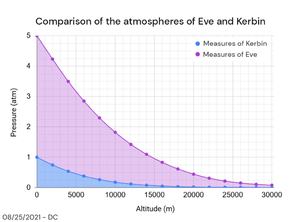 (updated) Comparison of the atmospheres of Eve and Kerbin

The average molecular weight of Eve air is 43 g/mol, and its adiabatic index is 1.20. Although the composition of Eve's atmosphere is unknown these values suggest that it may consist largely of carbon dioxide. Another possibility is that the atmosphere is filled with ethane gas (C2H6, with a heat capacity of 1.2 and a molecular weight of 30 g/mol) and other compounds. If we assume LiquidFuel is kerosene, the joke that the lakes of Eve are LiquidFuel is strengthened by the purple colour since it is often mixed with a purple dye prior to sale. With a thick atmosphere filled with hydrocarbons, it is easy to imagine reactions that would yield compounds such as RP-1, the grade of kerosene used as rocket fuel. An atmosphere of 90% CO2 and 10% C2H6 would have molecular weights and adiabatic indexes close to what is seen on Eve, though there are other combinations of gases that would work as well.

Like all other atmospheres in the game, Eve's atmosphere fades exponentially as altitude increases. The scale height varies with altitude, which is a change from pre-1.0 versions of the game. The pressure-altitude profile is globally constant and independent of temperature. The following table below gives the atmospheric pressure at various altitudes above sea level.

The surface of Eve is extremely hot, with a globally averaged sea level temperature of approximately 135 °C. Except for a small inversion layer between 50-60 km at low latitudes, air temperatures decrease with increasing altitude up to an altitude of 70 km. Above 70 km, the rarified atmosphere warms as altitude increases. Despite the hot surface temperatures, the lack of a stratosphere means that Eve's atmosphere is cooler than Kerbin's at altitudes above ≈26.5 km. The temperature rise above 70 km suggests the presence of a thermosphere in this area(70km to the Kármán line(90km)

Eve has 14 accesible Biomes with their own science to be collected, as well as one inaccesible Biome. Its main features are a large Explodium Sea with some scattered Islands and Shallow areas as well as a Main Continent and Poles. Within the Continent lie three large bodies of liquid, one being a Crater Lake. There are also areas covered with Impact Ejecta.

In Kerbal Space Program, each biome has an RGB color assigned to it. To know in which biome a craft is, the game obtains the color of the biome from a Biome map (Seen above) and then referenced with the list of biomes.

The biome "Akatsuki Lake" on the other hand, probably due to an oversight, is scattered in small pockets all around the planet, with it composing less than 0.001% of the surface of the planet. Most of these pockets are small areas located near the supposed-to-be "Craters" biome in the biome map (For example, you can find this biome at 0.08° S, 8.44° W). The "Akatsuki Lake" actually does exist in a large chunk on biome maps, as it is supposed to be the lake at 50 lat, 100 lng, but instead the lake's biome is "Foothills". This suggests that the developers forgot to add it in.