"Asparagus staging" uses cross-feed of fuel so all the remaining fuel tanks are full after staging events. This is the case on Falcon Heavy, where fuel from the side boosters is fed into the center tank of the first stage. MattW (talk) 13:59, 8 March 2013 (CST) 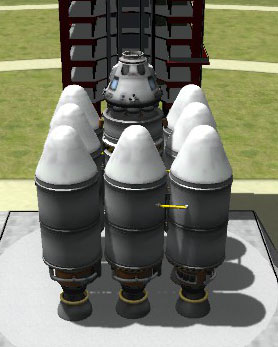 The Rocktopus mk1, shortly prior to its "Unintentional Midstage Disassembly". No survivors.

I have 2 suggestions: For a very serious sounding title, I recommend "Radial Staging" or "Radial Crossfeed Staging". However, Whenever I have a rocket design that is 8 outer rockets mounted to a central rocket, I prefer the term "Rocktopus". Ninenineninefour (talk) 12:20, 2 March 2013 (CST)

Radial staging would be a misnomer, because the stages don't necessarily have to be radial. You can also use this technique when you place the stages next to each other in a line. I have a different suggestion, though. When you feed one stage from all others, it's called parallel crossfeed staging. When you do asparagus staging, you have a series of stages which take over the fuel supply. So why not call Asparagus Staging Serial Crossfeed Staging? I do, however, doubt that any new name will catch on so quick. The term is too established in the KSP community already. --Crush (talk) 07:03, 3 March 2013 (CST)

I suggest the name "Onion Staging", it seems more fitting because it is composed of layers of stages. Also the layers peel off as they go up just as an onion is peeled. --rsgm (talk) 18:37, 2 April 2013 (CST)

"Onion staging" commonly refers to the staging where tanks drop in layers, outer-to-inner, with the entire layer dropping at once, as distinguished from "asparagus staging" where you just drop two "stalks" at a time rather than the entire layer. --Gaius (talk) 03:22, 28 February 2014 (CST)

Is this a tutorial?

As not-a-tutorial this article explains the purpose of asparagus staging well, but not how to implement it. It isn't intuitive, at least not looking at the Kerbal X staging diagram, because there are four 'micro-stages' in there and, aside from the grouping of engines into four groups, there's no visible way to tell that this is intentional design. Is this intended as a not-a-tutorial page? Or would a short, 'how to group engines for asparagus staging' section be OK here? Gordonf (talk) 15:13, 28 January 2016 (UTC)

While still not intuitive, seeing the separators as stand-alone stages and noting that components don't necessarily detach because of a staging trigger, plus seeing that the separators, smaller tanks and engines were added as pairs (probably in dual symmetry), helps this make more sense. I think I'm gonna put together a how-to though, to help future n00bs. Gordonf (talk) 19:06, 2 February 2016 (UTC)