An Aeris 3A with an FL-400 fuel tank in place of one of the fuel tanks and a ram air intake mounted on the top with a tailpiece is capable of suborbital flight, exceeding those of the Aeris 4A (with my mediocre skill), up to 150km.— Preceding unsigned comment added by Thompcan (talk • contribs) 15:51, 15 May 2014‎ (UTC)

The power up / down curve also is identical.

After all, the Rapier is just a bit weaker Turbojet (190 vs. 225 KN) with the same weight, thus having a slightly worse TWR, otherwise the exact same characteristics. Therefore it generates the thrust of about six Rockomax 48-7s in rocket mode while having a slightly better Isp (360 vs 350), meaning that a spaceplane with the same Air / rocket thrust is lighter with the Rapier than with the Turbojet / 78-7s combinaton.

The main disatvantage is the missing power generation.

If you look into the part configurations you also see that the stats are the same, which is interesting because then there is basically no need for the TurboJet Engine. And it doesn't look like the TurboJet Engine has been nerved or the R.A.P.I.E.R. Engine has been buffed. And it's alone from the Isp values already better than the 78-7S and the thrust itself is not that important. They also have the same mass, so you can't even argue that the TurboJet Engine saves mass.
Please note that the display of the specific impulse in the infobox isn't very good for jet engines currently.
About wiki edits in general: Add --~~~~ at the end of a comment you make on talk pages to automatically sign it. — xZise [talk] 14:39, 3 December 2014 (CST)

The jet engine is actually quite useful, and yes, it saves mass. For the same trust, you need only 5 jets for every 6 rapiers. The jet+LV-N is an especially potent combo for interplanetary travel. The Rapier ISP is less than half, and the craft would need more efficient engines for far-away travel anyway. Once the jet engines get going fast enough (over 2-2.2km/s) at 32-35km, the LV-Ns can perform essentially a low-trust Hoffman transfer to 70km. It can be done with 0.1 TWR from the LV-Ns. The Rapiers make the ascent easier by providing more trust on rocket mode, but they are much more inefficient. Overall jets+LV-Ns can lift nearly 85% of the initial mass to orbit, which is beyond what Rapiers alone can achieve.

Well comparing it with a LV-N is not fair as there is a comparison in TurboJet Engine which says that a TJE and Rockomax 48-7S combination is more efficient than a R.A.P.I.E.R. Engine. Also going alone from the part configuration, the thrust behaviour for speeds up to 2 km/s of the TJE and RAPIER are the same. Just the TJE goes up to 2.4 km/s while the RAPIER goes “only” up to 2.2 km/s.
I had a short conversation with User:UmbralRaptor on Twitter today: https://twitter.com/Newpa_Hasai/status/540559500474724352 — xZise [talk] 15:55, 4 December 2014 (CST) 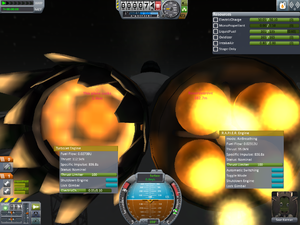 Comparative thrust and fuel on the runway. 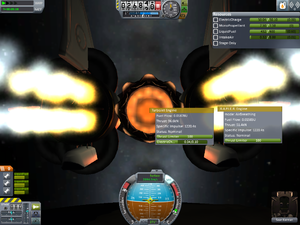 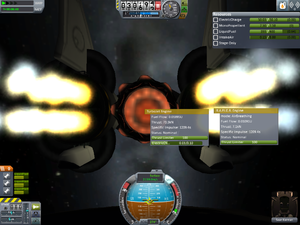 My preferred use of effective Isp is to note that air is "free" (multiplying the nominal Isp by 16), but the thrust curve does not affect fuel consumption. On the pad, you can clearly see turbojets/rapiers burning propellant like they're generating the full 225/190 kN, even though they're actually only putting out 112.5/95 kN. This thrust not affecting fuel use is why turbojets have a higher effective Isp above 2000 m/s, dramatically so above 2100 m/s. (Though setting up pics like this to demonstrate is terribly clumsy) UmbralRaptor (talk) 23:07, 4 December 2014 (CST)

The high-speed behaviour is interesting. Probably, this is the reason for my preffered trial-and-error-brought-me-there LEO SSTO combination of TJEs WITH Rapiers. During ascend, the Rapiers add the needed thrust, in high athmosphere a central TJE alone (depending on craft size) raises the speed to max, then the Rapier(s) operate in rocket mode for orbital injection, with the TJE giving addidional trust up to 50..55 km. for me, this is (once more) a situation, where there is no single best option / where two seemingly rivals are no rivals but partners. Right now, I use SSTOs only for LEO missions (recovery of kerbals, refueling, probe delivery), so the heavy LV-N is not really an option for me. Although probe delivery is also possible by a regular plane, but needs a specific flight curve to not loose one of the crafts...

Well as I tried to say about the high speed values: The thrust curve for the TJE stops at 2.4 km/s while the RAPIER only generates thrust until 2.2 km/s and especially the last screenshot is almost at maximum speed for the RAPIER (just 41 m/s are missing) so obviously the thrust is pretty low. But until 2 km/s both engine should perform about equally. Now the thrust curve is afaik not linear so the lower maximum speed could also affect values below 2 km/s although both engines have the same profile in that range.
Also note that the thrust curve defines that at no speed the engine outputs 50% so this makes sense. I guess KSP is adding the thrust curve after calculating the fuel usage. I can't really test it at the moment but if the factors in the velocity curve are set to 1 I'd guess the fuel consumption match with the calculated value. I'm also interested in screenshots of velocities at 1 and 2 km/s (or more general for speeds below 2 km/s) because you just have images where the RAPIER obviously is not as good as the TJE. But I'd guess for flight speeds below 2 km/s they are performing about the same. — xZise [talk] 08:02, 6 December 2014 (CST)