This tutorial is about how to calculate the satellite coverage of a celestial body. This is particularly useful for RemoteTech. Note: When placing multiple satellites in one orbit, it is more important that the semi-major axis is identical for all satellites. With an identical semi-major axis, nil eccentricity, and approximately identical inclination the exact positioning of the apsides is not critical. So long as the eccentricity is as close to nil as possible, variances in apside positioning and inclination will only result in a small oscillation (analemma). 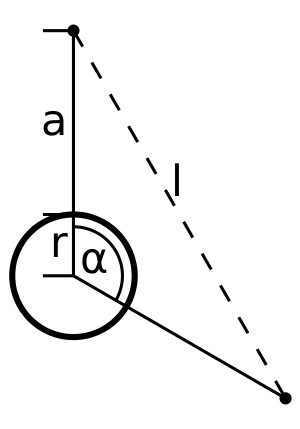 The distance between two satellites (if their angular distance is known) can be calculated with following formula:

is the angular distance,

the altitude above mean sea level, and

When all satellites in orbit have the same orbital period, the most efficient way to position them is in the corners of a regular convex polygon. Neighboring satellites should have an angular distance of

. Each satellite is placed on the same circular orbit and their position is a multiple of the following angle:

In other words, a satellite is positioned at every multiple of

must be greater or equal to

to allow a successful line-of-sight connection:

To determine how many satellites are needed for a specific altitude (as before,

must be greater than

(or 360°). The unit needed depends on which unit is used by cosine and arccosine in the calculations. Note that the number of satellites,

, must be greater than or equal to 3.

When using two satellites it is not possible to position them 180° apart, as the orbited body obstructs the line-of-sight they require. To provide near-100% coverage of an orbital body with only two satellites (at 180° separation) requires a very large

ratio and is not optimal. Keep in mind that the two satellites cannot communicate directly (via line-of-sight) and you will need to take measures to ensure connectivity is maintained.