This tutorial describes how to set up a basic relay network with the mod "RemoteTech".

Feedback is much appreciated on the Discussion page!

If things are too complicated or confusing, the fault lies with the tutorial for not being elaborate and/or clear enough, so complain! 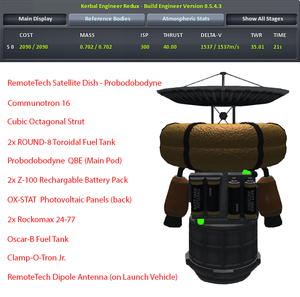 A mere relay satellite does not need much, but there are some absolute essentials:

It also might be a good idea to include a docking port somewhere, should it become necessary to expand the array of dishes on your relay sat later on.

Remark on interplanetary probes: Interplanetary probes will require a satellite link for most of their travel time. As SatDishes are disabled by default, you'll immediately lose contact to the vessel right on the launchpad if no antenna is mounted. Tip: Attach the antenna to your first launcher stage. Before launch, enable your satdishes and link them up properly, then you can safely discard the antenna during ascent and don't have useless weight to carry around.

The example satellite on the right shows that a relay satellite can be super small and doesn't require much at all. In fact, this satellite was used for the Mun Relay positions, as the available thrust is more than sufficient to complete the entire injection from LKO (75 km orbit) to the Mun tandem position. The probe still has enough fuel left to do be deorbited back to Kerbin. 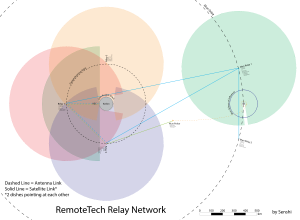 A diagram of a RemoteTech satellite network

The KSC (Kerbal Space Center), depicted on the left of Kerbin has an invisible 5Mm omni-antenna that always is powered. The range of the antenna is depicted in green. The planet Kerbin blocks the signal, so the effective range looks like a half-sphere.

This network approach relies on the usage of geosynchronous satellites as relays. The first satellite should be placed directly atop KSC. If it's your first launch, I suggest to make this a manned mission so you have full control of your vessel while trying to establish an orbit. If you want to go unmanned, you have to make sure that you circularize a first low orbit while still in direct range of KSC. When conducting the transfer to the geosynch orbit, also remember that you have to be in contact with KSC to start the transfer.

Then complete the network by placing at least two more satellites at a 90° angle from the first. If you do this perfectly and your satellites have a perfect stable orbit, this is sufficient. Due to lack of fine-control in speed and altitude (even with Mechjeb), satellites often tend to drift very slightly over time. It is safer to place a fourth satellite to complete coverage and serve as backup.

If you use better antennae on your Kerbin relay satellites, all these problems will be reduced as well and you can make a safe and sound 3-satellite network, placing them 120° apart. I suggest using the big 8 or 9Mm antennae that have to be extended. These are retracted by default, so use the 5Mm antenna for launch.

If you intend to do unmanned missions on the Kerbin polar regions (in-atmosphere), you'll need at least two more satellites to orbit at 90° inclination. Place them on the same orbit, 180° apart and you'll have (almost) 100% coverage of these areas. For regular low polar orbits the basic relay network suffices.

If you want to expand your network to the Mun, your Mun relay satellites have to be mounted with satellite dishes so you can control them once you leave the coverage of your Kerbin relay satellites. It is a good idea to always use 2 satellite dishes per vessel. In our example we will link our fist satellite up to Relay 1 and Relay 2. The upside of two dishes is that Kerbin will ever only be able to block out one of two relay satellites, so you will have continuous control of your vessel during all stages of flight.

Pre-Launch preparation: While you are still on the launchpad, do the following steps to set up RemoteTech properly:

The target orbit for the Mun relay satellites is a Kerbin orbit at the same altitude as the Mun, with the very same speed. This means you'll fly just behind/ahead of the Mun, retaining the same distance to it. We cannot use a geosynchronous orbit on Mun, as the Mun's sphere of influence is smaller than the necessary orbit. However, when looking from Kerbin, flying in "tandem" with the Mun is a pseudo-synchronous position, so it's a good trick for stable full-time Mun coverage.

Put one Mun relay ahead, one behind the Mun, both at a good distance (I suggest 3000–3500 km distance from the Mun, this will give a nice overlap and cover the entire sphere of influence of the Mun).

To cover any celestial body, the Tutorial:Satellite Coverage can what altitude is needed for an amount of given satellites. The formula to calculate the distance between two satellites is important to select the correct antenna.