A flag is one of several parts that can be used to add flag images (like logos, such as the Kerbal Space Program logo) to a craft. Flags are available in all radial sizes, as well as a flat variant.

Flags can be radially attached onto another part in the VAB, SPH, or during EVA construction. Once placed, it is possible to change a flag's image through the "Set Flag" option in the right-click menu. This will open the flag selection gallery; this is the same gallery used for other flag-related purposes, such as choosing a program flag at the Flag Pole. Additionally, the flag image can be mirrored through the "Mirror Flag" option.

Flags have a background color; if a flag image contains transparent areas, this flag color will show up behind the image. The background color can be switched in the right-click menu.

There are two ways to customize the shape of a flag. First, for radial flags, the flag's orientation can be toggled between portrait (default) and landscape through the "Orientation" option. (A landscape flag is much smaller than a portrait flag; both flags share the same width, where the portrait flag's short edge is as long as the landscape flag's long edge.) The flat flag has no orientation option; instead, the flag can be rotated by manually rotating the part, either while placing or through the Rotate tool.

Unlike other parts, flags can be attached to fairings by holding down the Mod key while placing.

Mass and cost are given as default values. Actual mass and cost will change depending on flag size and variant. 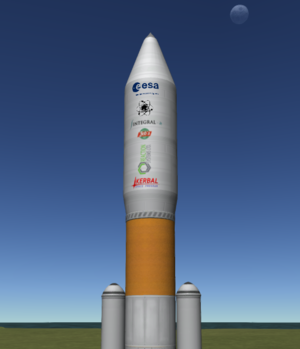 Using flags to show off our sponsors

The main use of flag parts is to apply decals and logos to a rocket. By choosing one of the default flag images, various decals can be added; for example, one can apply a Kerbodyne logo to a rocket's fairing, or a NASA logo to a solid rocket booster.

Additionally, through the use of custom flags, it is possible to add custom textures to a craft. This can be used to create instrument panels in service bay cockpits or windshields for rovers; the possibilities are endless!

An unusual use of flags takes advantage of their high impact tolerance (12 m/s) and light mass in order to lithobrake. Flag parts are unusually strong; by attaching a sphere of flag parts around a craft, any parts protected inside the sphere will be safe from collision, while the flags collide with the surface to lose velocity.