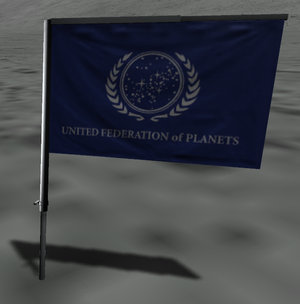 A flag is the image on the flags appearing at various places. There are two flagpoles, flags in the VAB and SPH, Extend-o-matic Series A1 Deployable Flags, and with 0.23.5 flags can be shown on parts. By default, there are 26 available flags, counting the Minimalist flag. These flags are:

All default flags are located in GameData/Squad/Flags although other mods can add their own images in their own directory (GameData/<mod>/Flags). New flags can be added and used if it is placed in this or similar folder. A flag filename can have spaces; underscores are not required to separate words.

Some of the images are based on posters from the 2009 International Year of Astronomy, while one is based Signalnoise's unofficial mission patches and another flags are based on animator and director David O'Reilly.[1]

The manufacturer's logos are also available as flags, starting from version 0.24.[2] 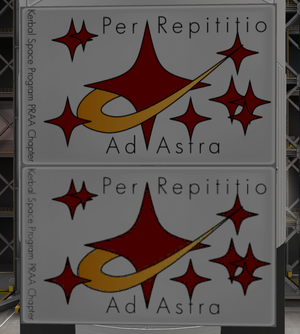 The new (top) and old (bottom) flag texture format in game. Open the full view to see artefacts introduced by scaling and texture compression in the bottom flag.

A flag is an image with a width to height ratio of 8:5. While older versions of the game used to provide and use flag images in the 256x160px format, they now use 512x256px images which can be directly mapped to textures on the GPU. Note that because the new files have a ratio of 2:1, they will be slightly squeezed in game and appear stretched out of game. To avoid quality loss, most flags use the PNG format, which also supports an alpha channel for transparency. 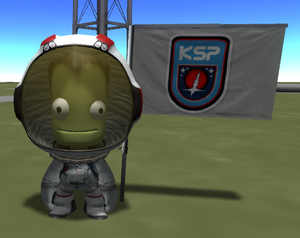 Although the original image was the Retro style, it shows the wrinkled pattern similar to this flag

The Minimalist flag, while it can be selected, appears as the default flag when planted. Some people say that the minimalist flag is overlaid onto non-default flags for realism, and while all non-default flags do bear wrinkles in the same pattern, changing this file won't change the appearance of the other flags. Most likely the game holds a similar image to this flag somewhere internally with integrated alpha channel to combine both flags. Oddly enough, the default flag does not have this overlay; rather, it is already part of the flag's .png image. This suggests that a flag named default.png will be left untouched; as a result, players can exploit this in order to have solid colors.

Gallery of the default flags

Gallery of the manufacturer logos