The default contents of the root directory, also showing the Steam library path 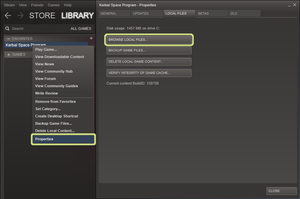 Opening the file browser from Steam

Steam allows multiple library folders. The defaults on the operating systems are including the path to KSP:

The manual installation is distributed in a zip archive. Depending on the operating system there is either KSP-win, KSP_linux or KSP-osx which contains the root directory of KSP. When this directory is extracted it can be placed anywhere, so this tutorial can't tell where to exactly find it.

Contains DLLs for KSP which are linked as a mod library. Assembly-CSharp.dll contains the KSP API. The UnityEngine.dll for pretty much needed by any mod and UnityEngine.UI.dll is needed for mods using a GUI.

Since version 0.20 the GameData directory was introduced in which most of the addons go. There are exceptions, like addons which were created previously and don't support the new directory format yet or addons which change the behaviour of KSP differently.

The directory for each mod (and Squad) has several standard subdirectories. Each one is optional.

The modules, textures and part configuration files are situated in this subdirectory. Many modders give each part its own directory for all the files it needs. However, different parts can coexist in the same directory.

In the saves directory all saved sessions are stored. In the directory is a directory for each season named after it. Changing the name won't influence how the entry is named in game. In each session directory are a persistent.sfs and if quicksaves were used quicksave.sfs. The persistent.sfs stores the automatic saves done by the game regularly and prior to exiting the session.

A Hard mode without the ability to save may appear nice in theory, but KSP is still unstable enough (especially with mods) that all progress can be easily lost by a crash and without a backed up persistent.sfs.

Once launched, ship information is stored in the .sfs and does NOT change if the .craft file it came from is updated.

For each game in the Saves directory, there is a corresponding Ships subdirectory. It contains two directories containing the saved craft for both the VAB and SPH. Craft designs exist independently from saves and changes in the craft files are not represent in the save file without actually launching that changed craft. Otherwise it would mean that any craft already launched would change if the craft in the editor is changed and that would make docking and staging impossible or at least very complicated.

There is also a directory for the stock craft that come with KSP. It is possible to delete or add craft to this directory but removing the directory itself should be avoided as the editors and save menus won't work.

These files are in the Kerbal Space Program directory.