Like all installations, the Vehicle Assembly Building is upgradeable in Career mode. The maximum number of parts used for building a craft and the available range of action groups increases with the upgrade level of the building. The first level allows only 30 parts, and no action groups, the second level 255 parts, and only the basic action groups (no custom groups), and the fully upgraded building has no limits on either. The state of development of the Launch Pad also limits the size of the buildable craft. 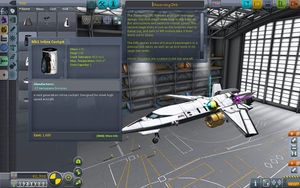 Spoiler: Additional things to discover.
Beginning at the southeast corner of the assembly bay, a series of climbable stairs and ladders lead to the roof of the VAB. However, surmounting the ladders onto the helipad deck is very difficult.
Spoiler: Glitch
If a Kerbal jumps off of the VAB roof, they may survive, but might temporarily glitch on landing, with the arms shooting outward and becoming the "thing" for a few seconds. It is similar to the effects experienced when falling into Jool.
Relative Level Interiors

Notes: structure biomes must be in contact with a craft to be accessed. The fact that the South Complex disappears when the VAB is fully upgraded may mean that you want to delay the upgrade until all your science instruments and/or the Mobile Processing Lab MPL-LG-2 are available. The total science that may be missed amounts to 55.5 points on 100% science rewards (Normal difficulty).