The complex consists of a vehicle assembly building, a launch pad, and a tracking station. It doesn't have a runway, although the land is flat enough for taxiing aircraft on. Currently[outdated], the Inland Kerbal Space Center uses the old VAB, LaunchPad and Tracking Station models/textures previously used for the main KSC in version 0.20 and earlier. In this sense, it is still possible to visit the old buildings in the new version.

The F3 menu, after crashing into the buildings, reports the launch pad here has three parts named “Launchpad Tower”, “Launchpad Platform”, and on the platform a “PlatformPlane”. The tracking station is “Tracking Station” with an “antena_gig” attached to a “base_rot”. And the vehicle assembly building is “Vehicle Assembly Building” with a “Box064” beside it. 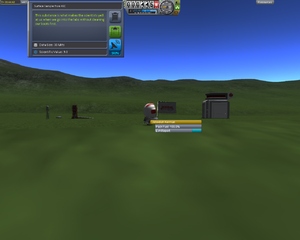 The surface sample returns the same information as at KSC

Kerbal Space Program seems to treat the Inland Kerbal Space Center identically to the main Kerbal Space Center for reporting craft situations and performing science activities. Currently[outdated] the game reports craft landed here as Landed at KSC and craft on its launch pad here as if they were on the LaunchPad at KSC. Because of this, the official name is not known.

Spoiler: Easter egg
It is located west-northwest of the true Kerbal Space Center (approximate bearing 300°, distance 760 km) in a flat valley at the south-east corner of a large mountain range within a vaguely "H" or "K" shaped depression. Also, there is a monolith near the tracking station.