Addons, mods or plugins are modifications to the official version of the game. They either add new parts, systems and mechanics to the game or replace existing ones. Addons are generally made by the community rather than the developers and can greatly enhance the playing experience. Due to their widespread popularity, Squad offers an official website for exchanging them on the Curse Network. As an alternative and independent unofficial source SpaceDock has a larger selection of mods. Previously the Kerbal SpacePort was used as official, but redirects now to the Curse Network page.

Another source is this post on the Kerbal Space Program forums, maintained by the community. 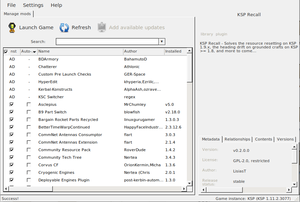 Usually the easiest way to install addons is to use the CKAN (Comprehensive Kerbal Archive Network) utility, which handles finding and installing mods for you. The facility has its own wiki https://github.com/KSP-CKAN/CKAN/wiki and may be downloaded from https://github.com/KSP-CKAN/CKAN/releases (The usual caveats about downloading and installing modules from third party sites apply)

Once you've downloaded it, save it somewhere useful (such as My Documents or the Desktop) and open it - it should locate the KSP directory automatically and present you with a list of mods you can install. However, some mods may still require manual installation, for which the details are below.

For example some addons contain sample craft. These are not installed in "Gamedata" folder, but in "Ships/SPH" or "Ships/VAB" folders. The sample subassemblies are installed in the "Subassemblies" folder in save folders, of course.

To install the content of a ZIP archive a program to unzip is required. Usually there is a program already installed, but there are various available on the internet. Of course it should be checked if the sources are trustworthy.

The directory structure was changed in 0.20, which introduced the GameData directory. There are still some plugins which use the old directory system which is more complicated and might introduce file conflicts, where two or more files need to be merged.

Manual installation differs on what mod you are using, refer to a README.md file, or a mod installing tutorial on the specific mod. Usually they involve taking the mod folder out of the ZIP Archive and into the GameData folder.

The contents of a ZIP archive are usually:

Sometimes mods require other mods to work which should be mentioned in the readme, Curse or forum page. These are distributed too in most cases with the original mod, which should be checked before copying the contents. Sometimes a mod distribute an older version which might break other plugins which require the newer version. Even worse are mods with a different name, because then the same mod is installed twice which usually break the game. The best way to handle is only installing the mod itself and manually checking if any requirements are already installed and if they might need to be updated.

The Toolbar mod is similar to the ModuleManager but all version share the same directory (000_toolbar) which can cause that a newer version may only partially overwrite an old version.

The game comes as a 32-bit and 64-bit application. When started as a 32-bit application there is a limit to the amount of memory it can access. Exceeding this limit results in an Access Violation, in which the game crashes (more often than not without any error message). An error log will then be created in the main directory. That limit is in theory 4 GiB (or 2³² bytes about 4 billion bytes) but the OS itself requires some resources so that applications usually can only access about 3 GiB. Usually this isn't an issue with KSP unless running a large amount of mods - though with official 64-bit support in versions 1.1 and above, this is unlikely to occur. However, if you're running on an older device or limited to 32-bit programs only, there are some things you can try.

The most common cause of an Access Violation is too many mods so one obvious solution is to uninstall a few mods, but that of course is counterproductive as the player wants to use those mods. Alternatively additional mods can be installed which reduce the memory footprint by compressing textures or similar. One prominent mod is the Active Texture Management mod which does cause most textures in-game to be lower-res.

In most cases, addons can be easily removed by deleting the addon directory in the GameData directory. (Using CKAN, just untick the 'installed' box.) Sometimes if other mods require the removed addon which then need to be removed too. If the addon introduced additional parts, craft which use those parts can't be loaded or approached. To disable the functionality without losing the craft, it is possible to change the file extension of all DLL files or remove them completely in the mod directory. Upon loading the game, the mod's code won't be loaded but the parts are still available.

As for installing, removing addons which use the directory system prior to 0.20 is more complex. Each file which was added in that mod needs to be removed manually usually and if files were merged, those needs to be undone.