In order to function, drills require electric charge and an ore tank with remaining capacity. Their extraction rate is greatly dependant on the presence, and level, of an engineer aboard the craft. To maintain optimal speed the drills also generally require their 'core heat' to be cooled using radiators. 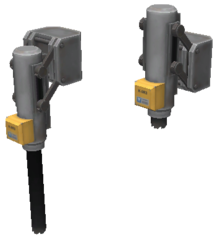 The primary use for the Drill-O-Matics is mining. This is achieved by positioning a drill on a surface area with a nominal concentration of ore and deploying the drill head into the ground.

When deployed, the drill head and extended shaft pass straight through craft and surfaces, but the drill housing at the top may collide with objects as it swings out (and so can be used to lift up the part attached to the drill). To activate surface harvesting, the drill head should be below (or slightly above) the surface of a celestial body.

A drill will produce ore faster at a site with higher ore concentration. These can be located by completing planetary scans with resource scanners. The Drill-O-Matic Junior requires a local concentration of at least 2.5% in order to initiate surface harvesting.

Collected ore can subsequently be turned into liquid fuel, oxidizer or monopropellant using a converter, or returned to Kerbin to complete specific contracts.

An engineer will increase a drill's output efficiency according to their level (number of stars), while aboard the craft (including in an EAS-1 External Command Seat). However, more than one engineer will have no additional effect - only the highest level is counted. Electricity consumption (and possibly heat production) also scales up with the engineer level multiplier.

While the drill is active, it extracts ore depending on the type of celestial body, the ore concentration in the area, the core temperature and the presence and level of an engineer on-board. The ore extraction rate is B·c·T·m where:

Note: The drill displays B·c as "Ore rate" and T·m as "X% load". The effective ore generation rate can be calculated by multiplying those two values.

On a planetary body or moon, charge used per second varies greatly, scaling up with engineer level, but also with thermal efficiency (as the drill core gradually warms up).

Asteroid harvesting mode consumes a flat rate of charge under all circumstances (provided there is space to store ore): Junior = 0.3⚡/s. Senior = 1.5⚡/s.

If a craft runs out of charge all drills with stop harvesting and require manual reactivation.

"Thermal efficiency" relates to the "core temperature" of a drill via fairly steep bell shaped curve, peaking at 100% at a temperature of 500K, falling away quickly at higher and lower temperatures (down to under 10% below 250K or over 750K).

When activated, a drill's core temperature will start out at (or somewhat below) ambient temperature of the part, rising slowly towards optimal over the course of very roughly 50 seconds. Radiators only transfer heat out of a drill core once it is above the 500K target temperature, so will not slow it reaching optimal.

Core cooling is most restricted by a drill's "Max Cooling" cap (e.g. stated as 50kW for the Drill-O-Matic Junior), rather than the heat dissipation capacity of radiators (with even the smallest being far more capable).

When asteroid harvesting, it is not possible to prevent a drill exceeding optimal temperature with a top level engineer of only 3 stars or lower. Engineers appear to also improve cooling effects, or raise caps, in this context.

In practice it is not possible to cause a drill to shut down from overheating using only internal heat generation - seemingly the heating effect diminishes as the thermal efficiency falls off, thus reaching an equilibrium with the heat lost to connected parts and surroundings before hitting 1000K.