How hard do your engines push UP? That's "thrust".

How hard does gravity pull DOWN? That's "weight".

The ratio of those two is, surprisingly, the "thrust-to-weight" ratio.

If thrust is pushing harder than weight, your rocket goes up! Hooray!

If weight is pulling harder than thrust, your rocket does not go up. Sad!

That's the "thrust-to-weight" ratio, or TWR, in a nutshell.

If TWR is less than one, then your rocket will not be going into space. You will need more engines, or perhaps MOAR BOOSTERZ!

If TWR is significantly above, say, 2.0, your rocket will ZOOM! But it might ZOOM too hard for your poor Kerbalnauts. Most rockets, straight off the launch pad, will utilize a TWR between 1.5 and 2.0.

Specific impulse measures the efficiency of a particular engine. Because this depends on the pressure of a rocket's surroundings, this can change between Sea Level and Vacuum (in space). Most engines are designed for optimal performance either at Sea Level (the big ones that drive your first stage and boosters, which have lots of thrust!) or Vacuum (where they won't burn as much propellant, but can be VERY efficient).

Specific impulse is used in important equations like THE ROCKET EQUATION (see next section) to determine how much oomph (or "delta-vee") you can get out of a given amount of propellant. The higher the specific impulse, the more efficient an engine is!

In real life, specific impulse is governed by things like combustion chamber pressure and propellant energy (hydrogen/oxygen is more efficient than kerosene/oxgyen). Fortunately for Jebediah, our dear Kerbals only have one brand of fuel to worry about. 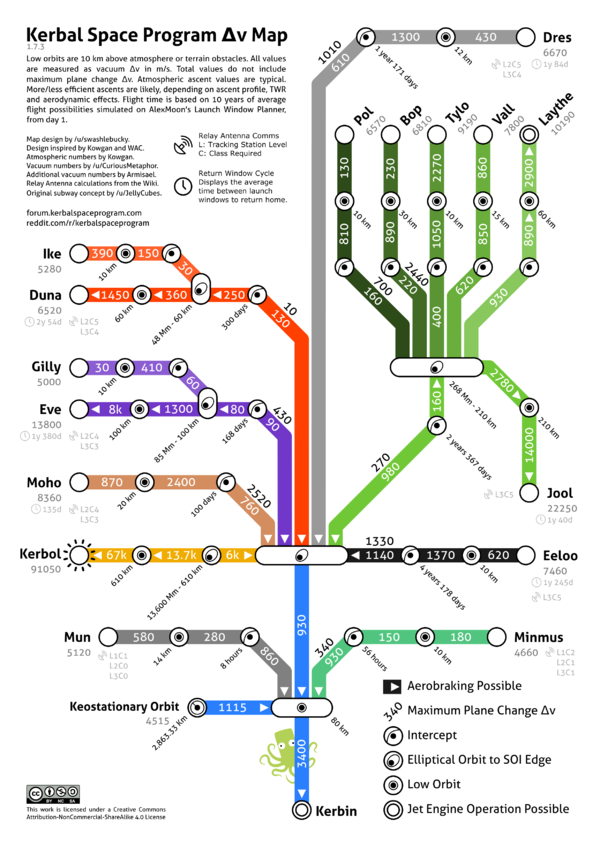