A gravity turn is a maneuver used to launch a craft into, or descend from, orbit around a celestial body while using minimal fuel. In order to escape the surface, a craft must rise faster than gravity pulls it down. In order to maintain a stable orbit, the craft must have enough sideways momentum at a high enough altitude to avoid colliding with any surface features or getting slowed down by the atmosphere, if any. A gravity turn combines these two steps into one maneuver, saving fuel in the process. As a craft starts ascending vertically, it slowly turns to the side until by the end of the turn it points sideways.

For an analogy, imagine getting to orbit without a gravity turn: it would be a straight up flight, then a 90 degree turn once high enough to orbit. Think of a gravity turn as "cutting the corner", so to speak. It's a shorter path, so it saves more fuel.

This efficiency also applies to landing from orbit. Instead of killing all horizontal speed and then beginning a slow descent to the surface, it's actually more efficient to slow both your horizontal and vertical speed at the same time.

Gravity turns work by fighting gravity the least amount possible to gain enough altitude and horizontal speed for the desired maneuver. Since the gravity of the local celestial body is always pulling on the craft, it will always accelerate most slowly when pointing directly away from that body and would accelerate faster in any other direction than straight vertical. If a launched craft followed a purely vertical flight path, then it would spend all of its thrust accelerating in the slowest direction, effectively spending the most Delta-V to gain the least speed without gaining any lateral speed necessary to orbit. In other words, a straight vertical launch is the least efficient launch.

The gravity turn maneuver is accomplished as follows. Assuming a perfectly flat launch site, the maneuver begins as a vertical launch, and follows with the vertical climb. Then once a certain altitude is reached, a slight turn is made, called the pitchover maneuver. By turning away from vertical slightly, gravity will pull the velocity vector of the craft down towards that direction and the craft has to tilt to follow it. The torque generated by the winglets placed on the bottom will tilt the rocket to the right direction in the atmosphere, but out of atmosphere or without these winglets the operator of the craft has to control the tilt. As this happens, the craft will gain more speed sooner since it is traveling in a vector that is not directly opposed to gravity - the centrifugal force starts to decrease the effect the gravity, effectively saving fuel and time. The farther the vector tilts to the side, the percentage of thrust spent fighting gravity becomes smaller and the percentage of thrust spent gaining speed becomes larger. Since the majority of this vector change is done by gravity and not by the flight controls, another tiny amount of fuel is saved. By the end of the gravity turn, no fuel is wasted fighting gravity. If the craft has gained enough lateral speed at an altitude above any mountains or atmosphere, it then begins a stable orbit.

The altitude to start a gravity turn with a pitchover maneuver at depends on several factors. On bodies with atmospheres, atmospheric pressure and drag also comes into determining the most efficient gravity turn.

When to begin and the amount of tilt in a gravity turn are based mainly on three things:

Any hill or mountain in the flight path should obviously be avoided. While increasing the height of the turn to clear an obstacle may not be the most efficient gravity turn on that body, it will avoid a collision.

On bodies with no atmospheres, a launched craft need not worry about any drag generated, and thus should turn to face near horizontal as early as possible given its TWR and the height of nearby surface features. Doing this minimizes the percentage of thrust spent resisting gravity, while maximizing the percentage of thrust spent gaining enough horizontal speed to achieve orbit.

On planets with an atmosphere however, the height at which to begin and amount of tilt in the turn are crucial to the success and efficiency of a gravity turn. If a craft turns too late or too little in its flight, it will waste more fuel fighting gravity than would be used resisting drag. If a craft turns too early or too far, it will travel a longer distance through the atmosphere, losing more speed to drag, requiring more fuel to regain that lost speed. If such a turn results in the craft pointing horizontal before arriving at an altitude above the atmosphere, then the craft will have to spend more delta-V to gain the necessary altitude if the TWR of the current stage allows it. If not, then it will result in an inevitable surface collision. Since later stages tend to have lower TWRs, it's generally safer to start the turn at a higher altitude or a narrower angle to avoid a situation where a later stage couldn't reach the altitude necessary to orbit. In case of ascending in a dense atmosphere, the dynamic pressure becomes a important factor as a speed too high can damage the craft, and the increased drag at lower altitudes will increase the fuel consumption more than the saving fighting the gravity. The terminal velocity indicates the optimal ascending speed.

The strength of gravity on the local body also comes into effect. On bodies with very strong gravity wells, a larger portion of thrust must be spent fighting gravity, leaving a smaller portion of thrust to spend gaining altitude and lateral speed. On such a body, that means a high turn at a narrow angle. Conversely, on a body with very light gravity, the turn can be low at a sharper angle. The craft's TWR also affects when to begin a turn. Craft with very high TWRs will have plenty of thrust to spare, so they can spend a tiny percentage of their thrust fighting gravity and a much larger percentage gaining lateral speed. This means that such a craft can make their gravity turns lower and sharper than a craft with a low TWR, and also means a faster, more efficient ascending with lower Δv cost.

Gravity turns are not always perfect. The most efficient gravity turn would have a continuous burn right up to completing a circular orbit. Factors like TWR changing as the craft flies and human reaction time keep them from being perfect. In most scenarios, the craft may need to pause its burn once any atmosphere is escaped, coast to apoapsis and then do a circularization burn.

For a beginner example for the proper turn timing and amount: try a gravity turn on Kerbin once you reach around 150 m/s (or 2 km altitude), with the ship facing about 5 degrees off vertical and towards the selected direction (east, in case of prograde equatorial orbit). From there keep the ship pointed prograde or slightly above if you get too close to your apoapsis before leaving the atmosphere. A more efficient one would require experimenting to find the best pitch over angle and speed for each craft (and celestial body). An ideal turn trajectory is calm, and follows the prograde (

) direction as the craft pitches over.

The TWR of a craft can greatly influence the gravity turn of a craft. Burning fuel will keep raising the TWR of the craft over time. The TWR will also change as staging progresses, rising as empty fuel tanks are lost but falling as engines are lost. If the craft is following too sharp a gravity turn, it could completely exhaust its more powerful beginning stages before escaping the atmosphere and advance to a stage meant for a higher altitude but now has a TWR too low to fight gravity, eventually leading to a surface collision. If the craft follows too narrow a gravity turn, it could spend its more powerful beginning stages reaching an altitude above the atmosphere, but then advancing to a stage with a TWR not powerful enough to properly circularize and orbit, eventually re-entering the atmosphere and colliding with the ground. 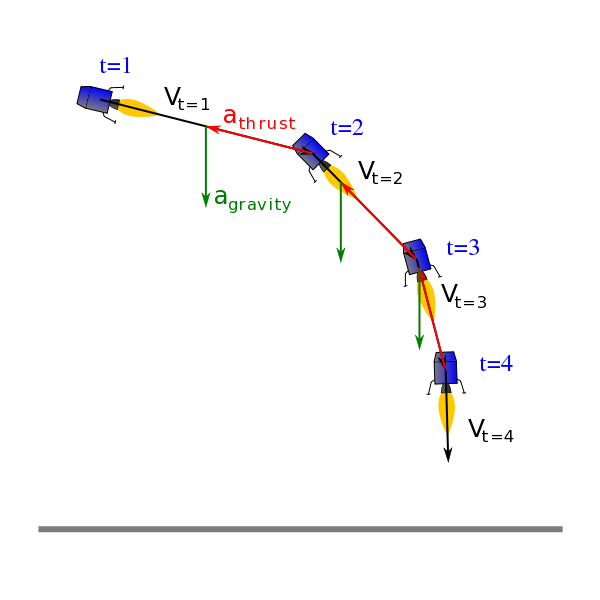 The gravity turn means the key for the efficient landing procedure. The main difference to the ascending is the events happen backwards in time. Due to retrograde (

The presence of the atmosphere gives a great aid as the drag is always pointing to the opposite direction on the velocity (if not effected by aerodynamic lift or any extra powered assist) - means prograde required for the gravity turn. The drag forces a kind of gravity turn on the vehicle - and the effect can be augmented using chutes. The parachutes can decrease the descending speed (= terminal velocity) for safe landing without any power assist in a properly dense atmosphere.

The situation of same on celestial bodies without atmosphere, just the maneuver has to be accomplished without the aid of always well-orientated "free engine" called drag. The pitchover maneuver must be started immediately after leaving the surface (minimal vertical climbing), and has to accelerate with full power for the most efficient ascending on bodies without atmosphere. It means (as playing it backward) the full-power deceleration (retrogade burn (

) has to be started as late as possible to be finished turning to vertical just above the surface. The approximating the "ideal" trajectory means increasing efficiency - and danger too. Rationally, some clearance is needed, but the descending speed has to be maximized reasonably after the craft turned to vertical orientation.