A Kraken Drive, also called a K-Drive, is an assembly that lets the player power a vehicle's thrust using suspension-based parts. It is part of a wider group of phantom force-based exploits, including the Docking Port Drive and "ladder drive". Kraken drives can be assembled with stock parts, and are of interest due to their ability to propel or halt ships effectively forever, at no cost.

Before Krakensbane was introduced in v0.17, the Deep Space Kraken generated phantom forces that would act on vessels moving at very high velocity. Noticeably, when moving at extremely high velocity ex. on an orbit taking the player's ship close to the Sun, the player's orbit would visibly change due to intense Kraken-induced acceleration.

Krakensbane significantly reduced phantom forces but did not remove them entirely. Physics errors can still be magnified, and even controlled, by building certain assemblies. This is the basis of the K-Drive.

The introduction of advanced tweakable same vessel part collisions introduced in v1.7.3 added significantly to the capability and functionality of K-Drives, including reliable functionality following time-warp due. Prior to this point, the necessary interaction could only be achieved with two distinct vessels. Additionally the use of robotic parts introduced via the Breaking Ground DLC or other mods were significantly helpful in developing control mechanisms for K-Drives.

Use and "operating modes" 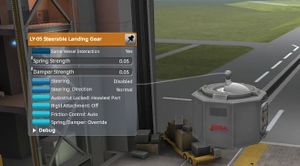 A simple implementation of the "landing wheel compression" 'k-Drive'. Note that same vessel interaction must be enabled on both the landing wheel and interacting part (here the lander can) for the drive to operate

Kraken drives are usually built using some assemblage of parts utilising suspension (e.g. landing legs or aircraft gears) offset so as to clip into the vessel when extended. Control can be achieved by extending these parts, moving other parts of the vessel to interact with these parts, or (from 1.7.3 onwards) toggling self-interaction. When engaged, K-Drives provide a non-Newtonian "thrust" resulting from the normal "reaction" force generated by the suspension, against which no counterpoint exists. This force exhibits according to the overall mass of the vessel, extent of compression, and circumstance of the vessel.

At low altitudes, and after take-off from a body, K-Drives behave differently from high altitudes and in space. The threshold of "low altitude" is not fully understood, and can vary from around 200m at the KSC to c.6km on Minmus depending (it is thought) on the altitude of the local terrain of the relevant biome. At these low altitudes , K-Drives generate a restrictive force in the direction of travel that limits velocity (depending on the parts used and mass involved) to typically 1-15m/s. Additional velocity orthogonal to the primary direction of travel can be achieved and can exceed the primary velocity, and extreme behaviour can result of "looping the loop" while utilising a K-Drive.

At high altitudes, K-Drives behave more like traditional engines, exhibiting a thrust in the suspension based part's direction of travel when engaged. Acceleration will vary dramatically according to the design used, but maximum acceleration in the range 15-60G have been demonstrated.

This discrepancy between operating velocities can be dangerous to vessels attempting to slow down using a K-Drive. If the vessel falls below the cutoff velocity, but is moving much faster than "low velocity", activating the K-Drive can make the drive try to slow itself to low velocity, instantly. G forces of over 10000 have been demonstrated using this technique, sometimes with non-fatal results.

If the suspension part is over-compressed it can "slip" out of its confinement, resulting in a variable thrust. This can also generate stress to the wheel/leg which can damage, or even destroy, the part. If only damaged, any Kerbal with the relevant repair experience can "reset" the part.

If the suspension-based part does not point in the direction of travel of the vessel, or though the centre of mass, results can vary, and in particular a rapid rotation can result from the torque generated.

Many reliable mechanisms for K-Drive construction exist. The most simple design attaches an LY 05 steerable landing gear part to the centre point of the base of a Mk1 Command Pod, and offsets it upwards until the half of the wheel housing is visible above the pod. Disengage steering on the gear, and for best results adjust the spring and dampening settings to the minimum settings, then enable 'same vessel interaction'. At launch, the drive is controlled in an "on-off" manner by toggling the pod "same vessel interaction". If working correctly, an immediate upward velocity of >6m/s should be observed until around 200m, whereupon 30+G should rapidly accelerate the pod upwards until the drive is disengaged or the thermal limit of the landing gear is reached, whichever happens first.

More advanced mechanisms will use moving parts, either robotic or not (e.g. the Making History DLC inflatable airlock), to vary the level of compression, and hence provide a form of thrust control. In later versions of KSP, these parts can be linked to action groups, including the throttle action, providing further control.

A major limitation of K-Drives has been their behaviour in Kerbol orbit. Specifically, vessels which perform properly within Kerbin SOI can fail if activated in Kerbol SOI due to an overload of the suspension part. This overload will occur a few seconds after the drive is engaged, and damages or (in extreme cases) can even destroy the K-drive, stranding the vessel unless it can be repaired or has alternative means of propulsion. This limitation can be overcome using a KAL-1000 Controller to "cycle" the same-vessel interaction of the key suspension part every few seconds, however this also results in a "stop-start" acceleration when the drive is active. After entering another other body SOI this should no longer be necessary.

At some point between December 2012 and January 2013, KSP Forum user A Fat Pokémon created a vessel in v0.18 called the "FTL Egg"[1] which was an assemblage of struts, structural pieces, and ladders which, when boarded by a Kerbal, took advantage of phantom forces generated when Kerbals climb ladders to generate linear acceleration capable of propelling the Egg and its rider at high velocity across the solar system. Despite garnering the attention of several tens of thousands of viewers at the time, the Egg did not immediately lead to further developments in harnessing physics glitches for spacecraft propulsion.

On February 3, 2014, Comrade Jenkins created a thread in the General Discussion section of the KSP forums entitled "Harnessing the Kraken: Eeloo in 11 Hours!"[2] asking players to post about their encounters with physics glitches and what caused them, in hopes of compiling enough data to create a useful "drive" taking advantage of errors to propel a spacecraft to interplanetary velocities. Over the next 16 days, the thread garnered 204 replies and received numerous submissions of candidate "Kraken Drives" varying in reliability and function. The thread in turn spawned several spinoff threads [citation needed] including a Spacecraft Exchange submission by user Rune featuring a working K-Drive mounted on a crewed vehicle (citation needed) and another thread by Comrade Jenkins (citation needed) asking players to submit data on the Hell Kraken for use assembling a drive capable of quickly flinging the player's ship across the solar system at extreme velocity.