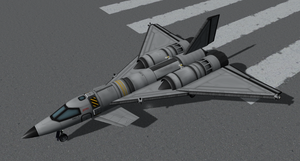 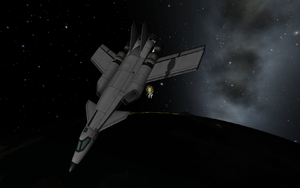 A single-stage-to-orbit craft (also known as a SSTO) is any craft that can reach orbit without having to rely on multiple stages or jettisoning components. A typical SSTO takes off from a runway or launchpad and reaches orbit with only the fuel stored within the tanks of the craft. SSTOs are not exclusively required to break orbit and re-enter the atmosphere for a landing as they may be refueled in orbit. Designing a Single Stage to Orbit craft generally requires a firm grasp of spacecraft as well as aircraft design in order to create a craft that can operate both within and outside of an atmosphere without changing aerodynamic profile and size.

Approaches to constructing a SSTO

There are 2 common types of SSTOs:

Disadvantages of this design:

When it comes to choosing engines for SSTOs there are two primary things that need to be addressed, thrust to weight ratio and efficiency.

An example stock craft which is a working single-stage-to-orbit spaceplane is the Aeris 4A.

Issues to consider while constructing

Spaceplane construction is far more involved and complex than rocket design. Whereas when designing rockets one only needs to pay attention to structural stability, center of gravity, and center of thrust, when designing spaceplanes one also needs to be concerned about the center of lift, angle of attack, as well as aerodynamic drag due to the non-symmetrical vertical nature of aircraft.