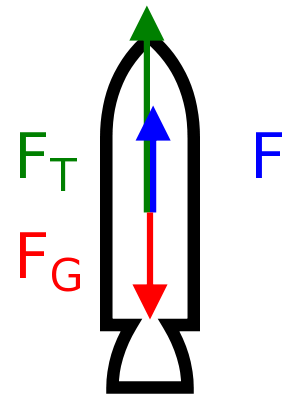 The thrust-to-weight ratio (TWR) is a ratio that defines the power of a craft's engines in relation to its own weight. If a craft needs to get into a stable orbit or land safely on the current celestial body without gliding or using parachutes, then its engines must put out more thrust than its current weight to counteract gravity. In the terms of a ratio, a craft with a greater thrust than weight will have a TWR greater than 1. The weight depends on the mass and local gravitational acceleration, which is usually the surface gravity of the body whose gravity well the craft is currently in. In a stable orbit, the thrust-to-weight ratio is not important, but its value can be used to estimate the maximum acceleration possible.

A useful equation to know is that your thrust has to be more than your mass multiplied by 9.81.

is given in multiples of

To estimate the maximum acceleration (

) at launching vertically only from knowing the TWR and gravitational acceleration the following formula can be used:

To lift off, the engines need to supply enough force in the opposite direction of the gravitational pull to counteract it. Usually the total thrust of all engines in the current stage running at full throttle is used in the calculation to find the largest possible ratio. The gravitational pull is the weight of the craft which can be calculated by multiplying the mass with the current gravitation. To make the formula easier, the surface gravity of the celestial body in question is used.

This value isn't constant over a flight because of several reasons: 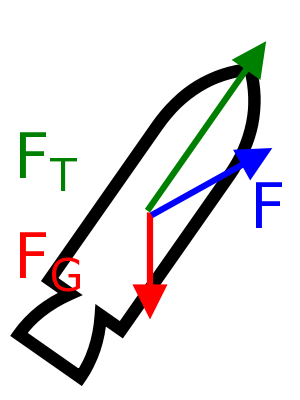 The engine is tilted by

This can also be used to calculate the thrust for engines that are placed angled on the craft. Technically it is like they are already pitched. Usually the engines on the other side are angled too, to thrust only upwards reducing the efficiency of the engines, because some thrust is cancelled out by them.

The Kerbal X with a mass of 130.94 t, 6 LV-T45 Liquid Fuel Engines and 1 Rockomax "Mainsail" Liquid Engine on the launch pad of the Kerbal Space Center has a TWR of:

The second stage of a Kerbal X with a mass of 16.12 t and the Rockomax "Poodle" Liquid Engine with 220 kN thrust can lift off only with full throttle from Kerbin but it lifts off quite well from the Mun:

If the engine has been worked with the thrust of LV-909 Liquid Fuel Engine which produces only 50 kN thrust the stage itself wouldn't be able to lift off Kerbin, but still could lift up from Mun. 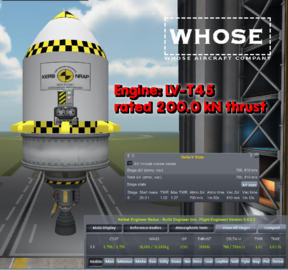 The test craft shown here has a mass of 20 metric tons (20,000 kg); it is powered by a stock LV-T45 engine rated at 200 kN of thrust. As you can see, this yields a TWR at Kerbin surface just sufficient to lift off the pad.

Because the gravitational acceleration on Kerbin's surface is roughly 10 m/s², 10 kN per ton or 100 kg per unit of thrust result in a thrust-to-weight ratio of about 1. This represents the minimum for launch; a TWR in the range 1.5 to 2.5 is better.