The Poodle has a moderate thrust to weight ratio, offset by its relatively short height, high specific impulse and thrust, and gimbal range. It performs very poorly in atmospheric conditions but it excels at vacuum operation. It has the highest Isp of any non-DC LF/O engine, making it very fuel efficient in vacuum. This makes it an ideal engine for large-diameter, upper stages of rockets for landings, orbital insertions, and transfers.

The gimbal functions by having the whole engine structure mounted on 4 hydraulic arms. The two nozzles cannot move independently, so the gimbal will not assist with roll control if it is in line with the rocket body.

As of version 1.10 this engine has two variants that can be switched in the editor. 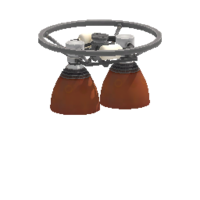 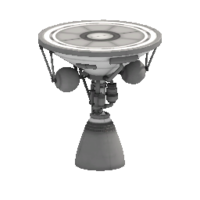