This tutorial will show you how to launch the Kergena Target Vehicle (KTV) into orbit and master your docking and EVA skills. The KTV is the KSP's "training module" that is can be used to train Kerbal in orbital docking and maneuver techniques. It is a self-powered, remote managed orbital docking target designed to simulate a space station or another spacecraft. It is equipped with a docking collar, RCS and main engine for maneuvering, lights and ladders for EVA practice and solar panels and batteries to provide remote control and guidance.

Assemble the Kergena Target Vehicle payload with the parts in the order listed from top to bottom. You'll need to start with the Remote Guidance Unit and then place the Small Inline Reaction Wheel and LV-909 engine below it and the fuel tank, docking port and all of the attached hardware above.

Mount the four(4) RCS quads on the upper half of the KTV main fuel tank. Mount the ladders in pairs and batteries opposing them so they are clear of the RCS quads (in an "X" turned 45 degrees from the RCS quads). 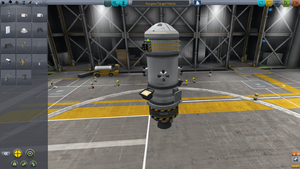 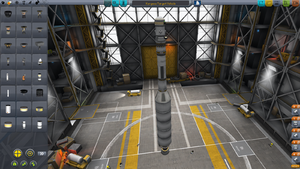 Activate the SAS and then launch the Kergena booster at full power. The Mainsail engine will begin to overheat shortly after liftoff so throttle back to around 80 percent. Climb straight until 12 km (12000m) and then make your gravity turn to the right on the 90 degree line on the NavBall. Hold about a 45 degree climb angle and switch to the Map View (press 'M'). Open the NavBall in that view and control your flight from there. At first stage burnout, you should be on a suborbital trajectory to an apoapsis of around 120 km. Jettison your first stage and coast up to apoapsis.

Right-click on your solar panels to deploy them on the KTV to charge the batteries and turn on the lights. Congratulations, your Kergena Target Vehicle is now in orbit and ready for docking practice!

Exactly, this isn't any weird at all!