Probes and Satellites are two different things. This tutorial intends to help you understand what they are, what they do, and how you can build one in Kerbal Space Program.

A probe is an unmanned spacecraft that travels through space to collect science information, sent back for scientists to study.

Probes and satellites are generally much smaller than manned vehicles, and thus require less energy to launch them into orbit. You can build them in either the VAB or the SPH, but this tutorial will focus on the Vehicle Assembly Building (VAB). 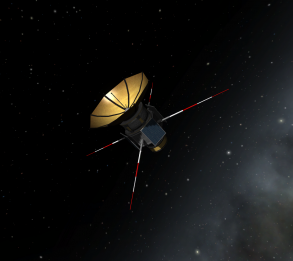 A Kerbal Satellite In Orbit

Do you want to launch your first permanent, sustainable satellite? Are you bored and want to litter space with a billion small objects? Do you just want to practice deploying payloads into orbit? Then this tutorial is for you!

How To Build A Basic Satellite

First you need an unmanned command module right at the top of the rocket. You can choose from the range of unmanned command modules. The Probodobodyne Stayputnik looks cool, but it has no SAS. The OKTO and HECS have limited SAS capabilities and are cheap, making them good for early career satellites. The OKTO2 and QBE are very light but have no reaction wheels. The RC-001S and RC-L01 Remote Guidance Units, MK2 Drone Core, and HECS2 have excellent batteries and reaction wheels with full SAS, but are expensive, making them a good choice for late game career and sandbox missions.

Now you want to control your probe so add tiny parts for a light weight probe or satellite. Use two Stratus-V Roundified Monopropellant Tanks on opposite sides to the solar panels and four RV-105 RCS Thruster Blocks, two ROUND-8 Toroidal Fuel Tanks and a small Liquid Fuel Engine at the bottom of the probe; the LV-909 Liquid Fuel Engine is a good choice.

You also need an Antennas to control your probe and transmit scientific data back to Kerbin. For example, you could use one Communotron 16 right on the top of your command module.

Lastly, you will need to add a separator (like the TS-18 Stack Separator) right below your engine, and a fairing below that. Now, build a rocket to launch your satellite into orbit.

Step 2: Build a rocket to launch your satellite into orbit

This is an example rocket that can do the job. Of course, you can design your own or use the one from another tutorial, provided it can reach the intended orbit of your satellite.

Satellite and Rocket on Launchpad

Stage One: This stage needs to be as short as possible so it doesn’t wobble about when you launch and needs to be aerodynamic to reduce drag. Attach a Rockomax Brand Adapter below the separator. Use a Rockomax X200-8 Fuel Tank and an Advanced Reaction Wheel Module, Large between the Fuel tank and the Adapter.

Put a Rockomax Brand Adapter 02 at the bottom and make sure the flat end is pointed up (use W,A,S,D,Q,E to rotate the part). Finally, add a LV-N Atomic Rocket Motor and another separator below.

Stage Two: This stage will be your main launch engine. Add another Rockomax Brand Adapter and attach to it a Rockomax Jumbo-64 Fuel Tank with one Rockomax "Mainsail" Liquid Engine for your centre of thrust.

Add TT-38K Radial Decouplers; eight will do. Use the symmetry mode and set to 8. Attach BACC "Thumper" Solid Fuel Boosters to these decouplers. Make sure they are all programmed in the stage bar to the right of the screen when in the VAB.

Another way is to simply add a Rockomax Jumbo-64 Fuel Tank below the probe/satellite and then a Rockomax "Skipper" Liquid Engine.

Make sure you save! Use a name you'll remember or can recognize (For example, “Kerbal Orbital Probe Mk1”).

To launch your rocket into orbit, see this tutorial.

Decouple the satellite from the final stage. Extend all your antennae/solar panels/thermal control systems and admire your glorious creation!

What if it blows up?

If your rocket blows up on the launchpad you may need to add some EAS-4 Strut Connectors to hold the 8 Rockomax BACC Solid Fuel Boosters together. Eight Struts on the top, middle and bottom in-between the Boosters.

What if it the First Stage doesn’t have enough thrust?

If your Second Stage or "Orbit Stage" is not increasing in speed or it is losing attitude quickly you may need to add some Mk-55 "Thud" Liquid Fuel Engine on the sides of the craft. A symmetry mode of 3 should be enough to give it extra power.