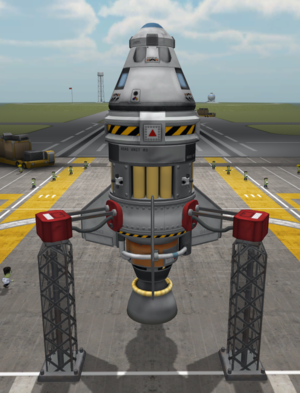 The Kerbal 2 is a stock ship which can be found in the VAB since version 0.21. It has a total mass of 19.36 t and a part count of 17. It is a small, powerful craft but is only capable of a very short sub-orbital flight. Therefore it would have to be attached to a large launcher in order to get it into space, let alone into orbit.

The first stage (stage 2) is comprised of a Rockomax "Mainsail" Liquid Engine and a Rockomax X200-8 Fuel Tank, and includes a large Advanced SAS Module, a FL-R1 RCS Fuel Tank and a Rockomax Brand Decoupler, along with four RV-105 RCS Thruster Blocks. It has three Delta-Deluxe Winglets for stability during the (very short) flight, and three TT18-A Launch Stability Enhancers for launch stability. At full thrust this is enough to reach a height of 3,088 metres above sea level.

Just purely as a stock craft, this craft is only good for short flights up to 3,088 metres only, and not capable of orbital flight.