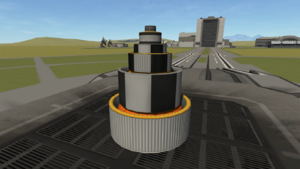 The image shows the different radial sizes of fuel tanks, from size 0 [0.625m], seen on top of the image, to size 4 [5m], seen in the bottom. This image contains parts from the 'Making History' expansion.

Two new official radial sizes were introduced in the DLC Making History: the Medium / 1.875 m and the Huge / 5 m, along with the parts that use them.