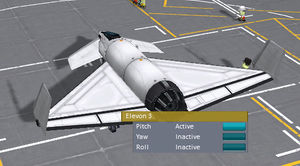 adjusting the reaction to the different axes

A control surface is an aerodynamic part that provides reactive force when in motion relative to the surrounding atmosphere. Control surfaces provide greater control and stability to rockets and aircraft, though they are of no use outside of an atmosphere.

Each of the control surfaces has tweakables to enable or disable each control axis. Disabling undesired axes can prevent the craft from over-reacting to control inputs. These can be done in the SPH or VAB, and even after launch (except State).

To provide a good level of control in a given axis, they should be placed far away from the center of mass in the appropriate direction:

The Active/Inactive label by the axis indicates whether the control surface responds to input in the given axis.

The control surfaces can be also controlled by action groups:

This retraction represents extending flaps, which increases lift and drag, thus reducing stall speed. This is useful for reducing speed and altitude while maintaining a level attitude for a landing approach. It may be a good idea to start with flaps deployed and bind toggling them to the "gears" action group.