The Reaction Control System, or RCS, is a set of monopropellant-fuelled (with the exception of the Vernor Engine) thrusters primarily intended for vessel orientation in a vacuum. It is toggled on and off by pressing the R key (default key binding). Kerbals on EVA have EVA Jetpacks that automagically refill when re-boarding a craft, though the controls for an EVA jetpack are completely different than for a spacecraft. This article does not discuss EVA jetpacks.

In order to use RCS, a monopropellant tank and at least two RCS thrusters are needed. The fuel tanks for monopropellant are different from solid or liquid fuels tank. There is one tank for each radius, and two radial-mounted tanks. Apart from the dedicated tanks, some monopropellant is stored in command pods but not in probe cores.

It should also be noted that the SAS system will make use of the thrusters if RCS is enabled at the same time as SAS. To avoid a constant drain of RCS fuel, it is recommended to not have both the RCS and the SAS systems enabled at the same time, unless you need to keep your ship dead level and/or have RCS fuel to spare. It also important to note that enabling both systems at once may cause multiple command-and-control subsystems (i.e. reaction wheels and RCS thrusters) to fight against each other, burning excess resources (electric charge and monopropellant in this case.)

In real life, RCS is used to control the attitude of a spacecraft rather than its orbital velocity. 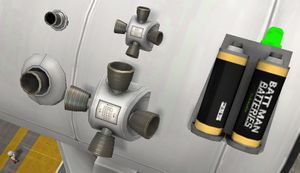 A size comparison of the available RCS thruster parts

The thrusters can be located anywhere on a ship. Unlike jet and liquid fuel engines, there is no need to place RCS thrusters on RCS fuel tanks or manually run fuel lines to them. The thruster block can provide full rotation control, whereas the linear port can only provide thrust in one direction. For rotational purposes, it is advisable to place the thrusters as far away from your center of mass as possible, thus maximizing the torque they generate. For the most effective control, it is typically most practical to place RCS thrusters with four way symmetry. In theory, you can provide suitable roll, pitch, and yaw control with just one set of four way thruster blocks. Translation maneuvers are easier when the thrusters for a specific direction are evenly distributed on both sides of the center of mass so they don't apply torque. This is usually accomplished with one set at the top and another at the bottom of your rocket. SAS may dampen unintentional changes of heading during translation movement.

If you are in space and enable RCS and notice suddenly that the axes of control seem to be all wrong, it's probably because your craft's attitude (not to be confused with a crew with a bad attitude) has it positioned in such a way that its control axes do not align with the navball. For this reason, you can set the camera to LOCKED mode such that it always aligns with the spacecraft (i.e. up on camera is up on the spacecraft) and RCS controls will line up with what you are expecting again. Attempting to do an RCS maneuver without adjusting the camera appropriately can quickly make you want to put your face into a running Mainsail.

RCS thrusters will be fatally damaged if they brush against the ground.