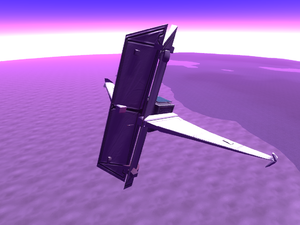 An infinite glider, often abbreviated as infiniglider, was a glider which exploited KSP's aerodynamics and allowed a craft to accelerate indefinitely without an engine. Most infinite glider designs used many control surfaces which were flapped very rapidly or multiple wings that were rotated very quickly. It was possible to use infinite gliders on every celestial body with an atmosphere.

Generally, infinite gliders were considered an exploit and not a legitimate game mechanic. They had been made impossible with the new aerodynamic implementation in 1.0.

Infinite gliders used to work by exploiting the game's old aerodynamics system and the way in which control surfaces interacted with the atmosphere. When a light craft was equipped with several control surfaces, rapidly moving them back and forth caused the airplane to quickly wobble in alternating directions and accelerate, possibly to speeds of 1–6 km/s or higher.

However, infinite gliders tended to experience high g-forces due to the erratic and rapidly changing nature of their acceleration, and could disintegrate if flown too quickly. This disintegration was generally a result of strain from acceleration or atmospheric drag exceeding the physics tolerances of the linkages between parts; to counter it, struts could be used to make high-speed gliders sturdier and more stable. Physical time warp, on the other hand, exacerbated the problem. Higher atmospheric density also increased the risk of an infinite glider tearing apart, due to the additional drag produced. The typical optimal altitude for an infiniglider on Kerbin (doesn't explode but moves as fast as possible) was around 0–13000 meters.

Most infinite gliders were very small craft, equipped with probe cores and solar panels to reduce their weight and hence increase their acceleration. However, manned infinigliders could also be manufactured, either using a command pod or an EAS-1 External Command Seat to hold a kerbal pilot. The latter designs required careful balancing and stabilization due to their typically high center of mass.[1]