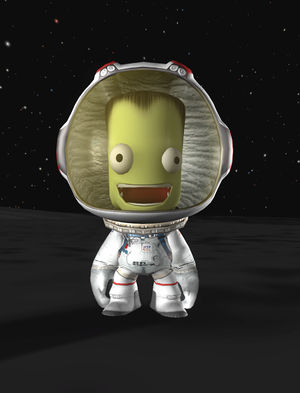 Kerbals display no variance in height or weight. They stand roughly 0.75 meters tall (2'5½"). As of 1.11, a Kerbal in an EVA suit, without jetpack nor parachute, has a mass of 45.0 kilograms (99.2 lbs.), which is 0.045 in-game Mass units. When including the parachute and jetpack, a Kerbonaut has a mass of 94 kg. When placed inside a command pod, a crew cabin (eg: PPD-10 Hitchhiker Storage Container) or the Mobile Processing Lab MPL-LG-2 , they add mass to the part; thus (compared to older version) anything that can hold a Kerbal was reduced to compensate for this change.[1]

Before 1.11, the Kerbal's mass only counted toward the mass of a craft if seated in an EAS-1 External Command Seat, and added no mass to any part that can hold a kerbal.

Kerbals also appear to be warm-blooded, given their ability to sweat, which is seen in the Asteroid Redirect teaser trailer on the KSP Youtube Channel.

Up until 1.0, all incorporated Kerbals seemed to be male considering their masculine names and general appearance. C7— a developer at Squad— has said that, “There were no plans to add female Kerbals,” also noting that they didn't have any specific sex in mind.[2] Arguments have been made, though, that while no gender has been officially expressed, a clear masculine/male gender bias was placed on the models.[3][4][5]

On February 21st 2015, the KSP developer team Tumblr page posted an artwork of the first official female Kerbal named Valentina Kerman. Valentina is a reference to Valentina Tereshkova, who is the first woman to have flown in space.[6]

Kerbals speak backwards Spanish. Their speech can be heard in the Astronaut Complex as well as the end of the credits theme. However, the credits theme is cut-off at the end, so the music file has to be extracted from the game files to hear it. In trailers as well, they speak reverse Spanish (aka "loñapsE").[7] However, Wernher von Kerman and Gene Kerman do emit sounds like "a-ha" and disappointed groans during in-game tutorials and at Mission Control. Curiously, they seem to write in modern English, not appearing as backwards Spanish.

All kerbonauts have a randomly generated first name and "Kerman" as the surname. The first name is either a combination of phonetic syllables or chosen from a list of preset names.[2] There are also a few uniquely named Kerbals, most of whom are apparent homages to real-life figures in NASA.