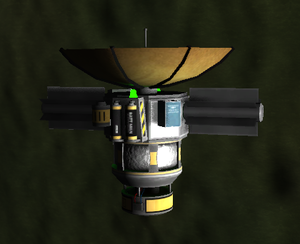 A probe in an orbit around Kerbin

Probes are craft whose command modules have zero crew capacity, modules generally known as “probe cores”. Probes can perform missions and can often more easily reach places that manned vessels either cannot reach or cannot return from (at same cost or tech level).

Craft controlled by probe cores that include crewed modules lacking command capability (the PPD-10 Hitchhiker Storage Container or the Mobile Processing Lab MPL-LG-2) are automatically classified by KSP as probes, although players may consider them some other type of craft. Likewise, players may consider particularly large probes or probes resembling conventional planes, rockets, or rovers as belonging to other types or categories.

Probes can be used for any type of craft and thus for any purpose. However, crewed command modules include Science opportunities for Crew Reports, EVA Reports, and, while landed, Surface Samples. Kerbonauts can also repair landing legs, wheels, and repack any parachutes, while probes cannot.

Even though probe cores constantly consume electricity and thus usually need more batteries and energy-sources than manned command pods, the mass of a probe is much lower than that of a manned vessel with comparable abilities in most cases. However, probe cores become uncontrollable if the craft runs out of electricity, so careful design and planning is required to keep probes under control. For an orbiting probe it's worthwhile to verify that the batteries will last through the orbit darkness time of the orbited body. In addition, if CommNet is enabled, then probe cores will need a connection to Kerbin's DSN or to a nearby ship with a probe control point for full functionality.

Note that a lower payload mass means that less fuel is required to bring probes to their destinations, which also means that longer trips become more feasible for probes than manned vehicles. Critically, lowering payload mass means exponentially less initial mass on launch within the atmosphere, and therefore less cost. Due to their lower mass they can use the more efficient ion engines more comfortably. Since they don't carry any Kerbals they can be used on one-way missions as well, further increasing their range and cost-savings.

While Kerbals can technically be used in one-way missions, they are not well suited for the purpose. Aside from the ethical issues of abandoned kerbals in one-way trips, there's also a financial benefit to using probes. In Career mode, hiring Kerbals costs money and it often takes numerous expensive flights to train them in their profession. Furthermore, losing them will reduce your organization's reputation. This makes it very unwise to treat Kerbals as expendable and makes unmanned exploration more important. This makes it necessary to use probes to complete missions where it would otherwise be too risky or costly to recover Kerbals. Probes with a power supply can also function indefinitely if they are in a stable orbit or parked on firm ground, allowing them to complete certain contracts without having to launch new vehicles. While Kerbals in a command pod can also survive indefinitely, there are no hiring and training costs associated with probes making them more practical for this purpose.