The PPD-10 Hitchhiker Storage Container (commonly the Hitchhiker Can) is a crew container/habitation module that can hold 4 Kerbals. It has a 2.5m radial size, and is likely intended for use in space stations.

The Hitchhiker Storage Container has the lowest impact and heat tolerance of any habitation module, making it a poor fit for any vessel destined for reentry or landing. The equal-capacity Mk2 Crew Cabin is better suited for these tasks.

Like other habitation modules, the Hitchhiker Storage Container increases the capacity of a vessel, allowing it to transport more Kerbals. This can be used to act as crew quarters for stations, or hold tourists or rescued Kerbals from contracts. Passengers in the cabin can perform a crew report.

The Hitchhiker Storage Container has the greatest inventory capacity of any habitation module, beaten only by the dedicated SEQ-24 Cargo Storage Unit. It has 18 inventory slots (2 more than the Mk3 Passenger Module), and has a volume limit of 1500L (2.3 times more volume per item, or 2.75 times more total volume).

The Hitchhiker Storage Container is empty by default, but can be filled in the VAB by using the Crew and Cargo tabs. Additionally, crew can enter and exit through the hatch from EVA, or through the “Transfer Crew” option. It has one hatch on its side, and two windows. A ladder runs along the side from the top of the container to the bottom; a Kerbal on EVA can move along the ladders from one Hitchhiker Storage Container to the next, if they are stacked with aligned ladders. 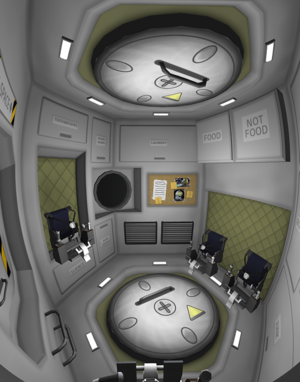