Reentry of a Kerbal X capsule 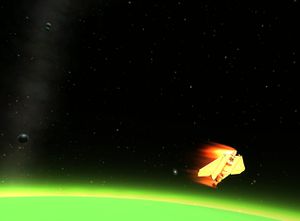 Atmospheric entry is the process of a spacecraft or other object entering the atmosphere of a celestial body. It is most commonly used when referring to the re-entry of Kerbin, although there are several bodies in the Kerbol system that have atmospheres. These bodies are, from innermost to outermost: Eve, Kerbin, Duna (Atmospheric Reentry is not very effective on Duna), Jool, and its moon Laythe.

The atmospheric entry can first be detected when the velocity starts to slow although the craft is falling and the periapsis is still ahead. As the craft sinks into the atmosphere, drag steadily increases and shock heating effects appear, which look like flames. Those effects were added in version 0.19.0.

Dangers for the craft

With the release of version 1.0, heating is simulated and can damage the craft. Atmospheric entry is often the most dangerous point of missions in the real world and like there it is possible to protect against the heat by using heat shields. Parts will be destroyed if they exceed their maximum temperature, with delicate parts like batteries usually breaking first. It is possible to change the strength of the heating by changing the difficulty before starting a session or using the Debug Toolbar while playing one.

Before version 1.0 flames already appeared but they were usually quite harmless in Kerbal Space Program. Those effects were merely cosmetic and in the stock game the drag induced by the atmosphere could only destroy extended solar panels – the exception being the OX-STAT Photovoltaic Panels, which cannot be extended or retracted; since they lie flat against the surface to which they're mounted, they won't be harmed by atmospheric entry unless they overheat. The rest of the craft won't break apart during entry unless it strikes the atmosphere at extremely high velocity (generally beyond that which can be achieved without cheating), doesn't have a heat shield, or has many flexible part joints and an un-aerodynamic shape (e.g., a space station).

If returning to Kerbin, the disintegrating solar panels might be fun to watch, but this phenomenon can be a danger to probes on other bodies. In extreme cases, it is possible for solar panels without the protective casing to be destroyed despite being retracted, though this only occurs on Eve's dense atmosphere.

With their protective spacesuits, Kerbals can survive entering the atmosphere. Of course, they will usually die upon impact, although a glitch exists in which they may not be harmed if they hit the ground helmet-first.

A spacecraft can be easily obliterated during atmospheric entry if physics warp is activated. It is advised not to activate physics warp with a parachuting ship until the chute opens. Parachutes that have opened can survive the 3x physics warp on Kerbin.