Tutorial:How to get to Minmus 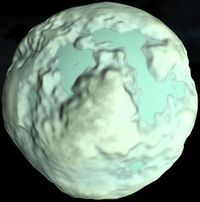 This tutorial will attempt to teach you how to get to Minmus. It assumes that you have successfully completed a trip to The Mun, if you haven't I suggest you check out the tutorial.

Click here for a more up-to-date version of the Mun tutorial.

Landing on Minmus is similar to landing on the Mun, with a few minor exceptions:

This stage should be much lighter than the one you would use to reach The Mun. Landing on Minmus and returning to Kerbin only requires about as much fuel put together as the landing phase of a Mun visit.

Take advantage of the weight you have saved on your lander to pack more fuel for this one. You will need it for the trip between Kerbin and Minmus.

This stage should not be much different than the one you would use on a Mun attempt. If you are not feeling confident about your middle stage, it never hurts to pack a little more fuel/thrust, adding boosters is never bad, you can use fuel ducts to get more Delta V.

While it may not be absolutely necessary, matching your orbital inclination with Minmus makes it much easier to get caught in its SOI. Set Minmus as your target and burn perpendicular to your orbital plane at one of the nodes until they read '0.0' or 'NaN'.

Similar to the Mun guide, wait until Minmus is about 4-5 degrees over the horizon (20-40 degrees in the map) to begin your burn. It will appear as a small dot above the horizon. Burn until your apoapsis intersects Minmus' orbit, and (hopefully) you will be caught. Alternatively, you could also burn until your apoapsis intersects Minmus's orbit without changing your inclination. You probably won't see an encounter, so to fix your inclination for much cheaper, halfway to the apoapsis burn antinormal to drag it down until you see an encounter. This takes less thrust and is more efficient.

Your orbit, retrograde burn, and landing will all be at much lower speeds than they would be at either the Mun or Kerbin. In fact, it's unlikely that you will (or should) reach speeds above 100 m/s at any point near Minmus, also move your retrograde vector pointing close to directly down. Try aiming for a frozen lake if you are looking for an easier landing, close to chart datum. Minmus' large mountain ranges make for more of a challenge elsewhere on the surface. And no, it's not a big ice cream!

This is a crude but effective method, using slightly more fuel than the advanced method below. Begin a light burn until you escape Minmus' SOI, then apply retrograde thrust until your periapsis is below 65 km altitude on Kerbin. Happy Landings!

This method is cheaper on fuel.