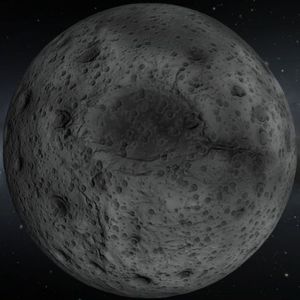 The Mun: You should see this up close at some point in this tutorial.

Kerbal Space Program can be a challenging game when you first start, especially if you know little about space. In this tutorial, I will explain in great detail and use simple language to help newcomers orbit their first moon in the game. I wish all newcomers good luck in exploring the Kerbol System!

Why go to the Mun First?

Going to your first moon can be a challenge. So why would you go to the Mun? Here are some reasons why:

Additionally, you will need a basic understanding of orbital mechanics (see Tutorials section and Getting Into Orbit tutorial), maneuver nodes, angles, and a lot of patience.

The prograde vector on the Navball.

The retrograde vector on the Navball.

The Maneuver Node vector on the Navball.

A Maneuver Node (Right-Click on orbit to place)

A Mun lander that is fully capable of landing and returning from the Mun.

The upper stage of your lander should be fully capable of landing and returning from the Mun.

Start with an Mk1 Command Pod and put a heat shield and a TD-12 Decoupler under that. Put two FL-T400 Fuel Tanks with a LV-909 "Terrier" Liquid Fuel Engine under that. Don't forget the landing legs! Put a set of four LT-05 Micro Landing Struts as close to the bottom of the fuel tanks as possible. Just make sure they can touch the ground below the engine. If you want to gather science from the surface, put two SC-9001 Science Jrs on ether side with the science experiments on them. Put an Mk16 Parachute on top of the Mk1 Command Pod for the landing on Kerbin

The middle stage will carry your rocket from Kerbin Orbit to the Munar Orbit and might also help with your lunar landing.

Put a TR-18A Stack Decoupler under the engine with a FL-T400 Fuel Tank under that. Use a LV-909 "Terrier" Liquid Fuel Engine for this stage.

This stage should be at least able to carry your other two stages to Kerbin Orbit.

Again, put a TR-18A Stack Decoupler and two FL-T800 Fuel Tanks (you can use four FL-T400 Fuel Tanks if you do not have that part yet) with the LV-T45 "Swivel" Liquid Fuel Engine on the bottom. Use two way symmetry and the [ALT] key to copy the two large fuel tanks and engines, as shown in the picture above. Put some Aerodynamic Nose Cones on top of those outside fuel tanks and use the EAS-4 Strut Connector to hold the upper stages to the lower stage. Put two TT-38K Radial Decouplers, one on each side with two sets of two BACC "Thumper" Solid Fuel Boosters attached to those decouplers. Add a lot of EAS-4 Strut Connectors to the rocket to keep it from wobbling.

Pro Tip: Use Reaction Wheels to help control your vessel. Please know that Reaction Wheels require Electric Charge to run requiring you to use Solar Panels and Batteries

What if I Don't Want to Land?

No problem! Just remove the LT-05 Micro Landing Struts and the whole Middle Stage. It's okay if you don't want to land the first time you go to the Mun.

Here is the staging for the rocket (Remove stages 4 and 3 and if you do not want to land on the Mun).

Going to the Mun

The Planetary Alignment does not really matter because you can access it from anywhere in Kerbin Orbit. If you want to go directly from your Orbital Insertion to your Mun Transfer, the Mun should be about 45 degrees to the west of the Launchpad.

Pro Tip: It is best to wait for a Planetary Alignment to go to other Celestial Bodies or you can be waiting for years and wasting fuel until they happen to line up. See the launch window calculator here https://alexmoon.github.io/ksp/

After you have ran through the Pre-Launch Checklist, hit space to activate the first stage. It will take some time but eventually your ship will reach 100m/s. Keep the throttle down to zero until you decouple the SRB's and activate the Lower Stage (Use the Z key). At about 10,000m, tilt your ship 45 degrees to the east. Once done, go into the Map View using the M key. Wait until your apoapsis (Blue Marker) is above 70km and than cut the throttle using the X key. Your Lower stage fuel tanks should be about half empty if you did this correctly.

Turn your ship (or use SAS) to face the prograde vector. then, when the timer under the apoapsis (ap) is at T-20s, activate the throttle (Z key). Wait until your periapsis (pe) is above 70km and then cut the throttle (X key). If you go past the apoapsis while doing your Orbital Insertion, use the A key and tilt your ship to the left until the apoapsis is ahead of you. You are now in Kerbin Orbit!

If you waited for the planetary alignment, you can keep the throttle on and continue to burn prograde until you get a Mun encounter. If not, create a Maneuver Node about 45 degrees BEHIND the Mun. Pull out the prograde vector until the dotted yellow line crosses the path of the Mun orbit. If you do not get an encounter, play with the prograde and retrograde vectors until you get a Mun encounter. Once you get an encounter, time warp to the maneuver node, turn your ship so you are facing the dark blue marker on the Navball, and activate the throttle (Z key). Remember to decouple the Lower stage when it runs out of fuel and activate your Middle Stage. When you get the encounter with the Mun, cut the throttle (X key) and quicksave the game using [ALT] + F5 and naming it "Mun Encounter".

Pro Tip: If you make a mistake, you can always resume from your last quicksave. Just press [ALT] + F9 and select the quicksave you want to load from.

Things to Know Before You Arrive at the Mun

Getting into Mun Orbit

Once you have gotten into the Mun's SOI, warp to periapsis, turn towards the retrograde vector on the Navball, and activate the engine (Z key). You can cut the engine once you enter a circular orbit around the Mun. Quicksave the game and name it "Mun Orbit".

Landing on the Mun

Time warp in Mun orbit until you are over the sunrise of the Mun. Then, activate your engine and burn until your periapsis disappears and your orbit line goes into the ground. Make sure the line ends on the light side of the Mun then cut your engine. If you still have fuel in your middle stage, use it for the beginning of the landing. If not, decouple the middle stage and activate the upper stage.

Slowing Down Your Ship

Once you pass 20,000m, activate your engine and slow down your velocity to under 50m/s, still pointing retrogade. Decouple your middle stage if you haven't done so yet. After that, keep slowing down your ship, keeping the velocity under 50m/s, until you see a shadow on the ground.

Once you see a shadow, lower your landing gear and slow your ship down to under 10m/s. You can use [SHIFT] and [CONTROL], and the bar to the right of the Navball to adjust the power of the engine. Keep ypur ship under 10m/s for landing as we are going for a typical touchdown speed (6 - 12 m/s). If a part of your ship explodes, reload to the last quicksave and try these steps again.

I Landed on the Mun, What Should I do Now?

Now is the time to relax. You have made it! Get the Kerbal of choice out of the capsule and plant a flag! If you brought science equipment, now is the time to do it. Explore your landing site by walking around.

When you are ready to leave the Mun, you should first quicksave and name it "Mun Departure". Start by activating the throttle and starting to turn eastward to about 70 degrees. Once your apoapsis has reached ~50km from the surface, cut the throttle. Wait until you are close to the apoapsis (about 20 seconds or so) then tilt your ship so it faces the prograde vector on the navball. Activate the throttle and burn until you get into a stable orbit.

Transferring From the Mun to Kerbin

When you are ready, just start burning prograde until you get an orbit around Kerbin and an escape trajectory from the Mun.

An easier way to do this is to just burn upwards from launch sending you straghit up to an escape trajectory (about 2,000km). Keep in mind that this method does require more fuel to complete.

Pro Tip: It is not a good idea to continue burning until you get an escape trajectory out of Kerbin. You will just go into Interplanetary Space and most likely never return to Kerbin.

To de-orbit, simply point your ship so it is facing the retrograde vector on the navball. Once your ship arrives at periapsis, activate the throttle. Once you see your apoapsis and periapsis swap positions and the periapsis disappear, cut the throttle. Try to save as much fuel as possible when de-orbiting so you can use it to slow yourself down in Kerbin's atmosphere.

Pro Tip: You can aerobrake on all planets with an atmosphere. If you put your periapsis inside the atmosphere of a planet, the atmosphere will help you slow yourself down and save fuel. This is very useful if you have little fuel left in your ship and you want to orbit a planet. Just be warned, this is not easy to accomplish so don't try it unless you know what you are doing.

Point your ship so it faces the retrograde vector on the navball for re-entry. Try to keep your ship pointed retrograde for the whole descent. At about 50km, use the remaining fuel in your engine to slow yourself down. Once you run out of fuel, decouple the last stage. Continue pointing your ship towards the retrograde vector until you reach about 200m/s. Then fire your parachute. At this point, you just have to wait until you land on the surface. You have now officially flown to the Mun and returned! Congratulations!

Pro Tip: Landing closer to the Space Center will give you more funds for recovered parts.You can also create a refuelling truck in the Spaceplane Hangar, drive it to the landing site, and refuel the vessel and get somewhere between 50-90% of spent funds.

Congratulations on making it to the Mun! Your next task is to explore Minmus, the next moon out. It has lower gravity and a hillier terrain, making a landing not very hard but it is twice the distance of the Mun. Good luck on reaching Minmus!