From Kerbal Space Program Wiki
Jump to: navigation, search
The Space Shuttle and Falcon 9 v1.1 are examples of reusable or partially reusable rockets in the real world. This tutorial will explain how to recover a spent stage so you can get those extra funds! 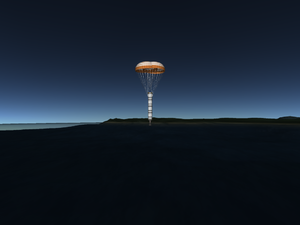 Many users have attached parachutes to their spent stages in the hope that it will parachute gently back to the planet. Unfortunately, this isn't the case. The game will automatically destroy any spacecraft that moves more than 20 kilometers away from your vehicle in the atmosphere. Thus, without mods, this feat is next to impossible to perform. The secret is to leave the atmosphere before releasing your spent stage so it isn't removed.

(If you are okay with mods, the StageRecovery mod was created for this purpose, it will automate recovery of unloaded stages.)

Note: In the staging sequence, where the second stage separates from the orbital stage, make sure to also deploy the second stage radial parachutes, because you won't be able to do this on the way back!