The Communotron 16 is an antenna, used to connect to CommNet and transmit science. It is deployable, and must be deployed to be usable.

The Communotron 16 is one of the weakest antennas in the game, tied with its horizontal variant the Communotron 16-S. As a result, it has the lowest antenna power, giving it the smallest range. When used with the starting level 1 Tracking Station, the antenna's range doesn't even reach Minmus. It also has the slowest science transmission of any antenna; however, it also uses the least amount of electric charge.

In order to use the antenna, it must first be deployed. If the antenna is retracted and the craft tries to transmit science, the antenna will automatically deploy and transmit the data, then return to its original retracted state on completion. Note that a closed antenna cannot connect to CommNet. In harder difficulties, once a craft goes out of range, there is no way to make it deploy its antenna!

When deployed, an extended antenna can break from impact or aerodynamic forces. It is much more fragile than an unextended antenna. If in atmosphere, the antenna will refuse to deploy if doing so would immediately expose it to extreme aero forces. A broken antenna can be repaired by an Engineer, using one EVA Repair Kit. (Prior to 1.11, broken antennas could be repaired for free by level 1 Engineers.)

The Communotron 16 is one of the first two antennas unlocked in the tech tree (along with the 16-S). It is a physicsless part, and its mass and drag are instead added to its parent part. 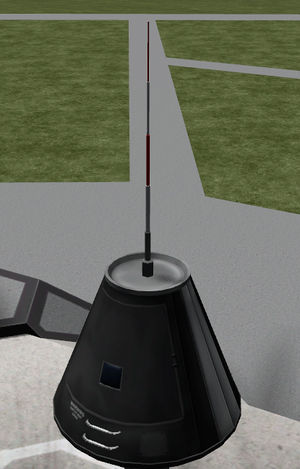 The Communotron 16 has a data rate of 0.3333 Mits/s and a data cost of 6 e/Mit. While by far the slowest transmitting device, it also uses the least amount of electric charge and is the first one the player gets their hands on in career. It's small and can be placed almost anywhere.