After we launched an unmanned satellite into orbit, we will now continue with the next step of space exploration: Bringing a Kerbal into orbit and back to the surface alive.

On April 12, 1961 the spacecraft Vostok 1 started from Russia with Yuri Gagarin on board and carried him around the planet. Gagarin was the first human in history who saw Earth from orbit with his own eyes and experienced weightlessness for longer than a few seconds. After the Sputnik Shock, the first manned spaceflight was another humiliation for the US space program. It led to the proclamation of John F. Kennedy that he will commit the whole nation to the goal to bring a man to the moon before the end of the decade, because he didn't want to let the Soviets take that victory too.

Ironically, the design of a manned craft is even a bit easier than that of an unmanned one, because the crew capsule is self-sustaining. That means we don't have to worry about energy supply like we did for Sputnik. Instead of that we need to add another component to ensure the survival of Yuri Kerbarin: A parachute.

But this time we still have a slightly larger payload. We will also need some extra fuel to de-orbit our vessel and get it back to the ground. We will solve this issue just like the Soviets did: By taking the Sputnik rocket and adding an additional 3rd stage to it.

Note that although historically accurate, the third stage is overkill. A few seperatrons strapped to the capsule fired retrograde is more than enough to de-orbit.

Note that the monopropellant thrusters and their fuel are still on the second stage. That means they won't be available on the last stage. That's not a problem, though: the capsule itself also has some steering power which is more than enough for control of the light upper stage.

Note that fins are required for stability (to prevent flipping during launch).

Also note that the upper stage isn't using the LV-T30 engine but the much lighter and energy-efficient LV-909. It won't be used before leaving the atmosphere, and in that phase it's much better to have less powerful but more economical thrust.

For those of you who think the Mk. 1 Pod is too Mercury-like (which it is), the Making History Expansion has a spherical pod that is similar to Vostok. The same pack also has a stock-alike two-man pod similar to Gemini. 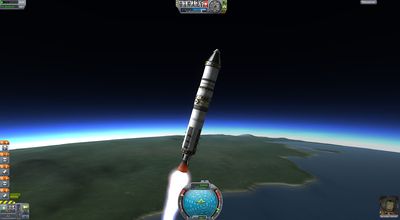 The launch goes just like that of Sputnik. Launch upwards, dump the first stage, ignite the second and do a gravity-turn after 10 km. This rocket requires a much slower gravity-turn than the previous one due to the lower thrust-to-weight ratio of the 2nd stage. So turn the rocket very slowly to the direction marker. In this mission we completely burn the second stage to raise our apoapsis.

Before we reach the apoapsis (the LV-909 engine accelerates slower, so we should start accelerating before we reach it), we use the last stage to enter a circular orbit. Watch out that you don't burn all your fuel, because you still need some left to get back into the atmosphere. 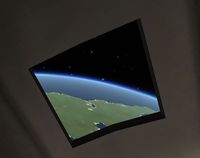 To experience the flight from the perspective of Yuri, click on his portrait and select "IVA" (Intra-Vehicular Activity). This allows you to look out of the small window above him and take a look at Kerbin no Kerbal has ever taken before. Should you see only stars, rotate your craft accordingly (you can do so from the IVA perspective). Should you see only black, you likely are on the night side. Accelerate time until sunrise. 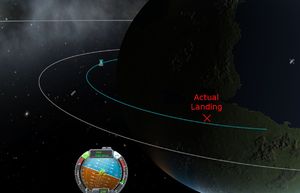 After Yuri had his fun in orbit, it's time to bring him back home so he can shake hands with politicians, get his parade, write books and go to talk shows. To do so, wait until you are at the apoapsis of your orbit and accelerate retrograde until your periapsis is about 25km. Keep in mind that it doesn't take atmospheric drag into account, so your actual landing will not be indicated. Keep this in mind when you intend to land on ground.

Just before you enter the atmosphere, jettison that third stage, preferable at an angle to your retrograde marker

When you enter the atmosphere, you will notice a dangerous-looking orange glow around the capsule due to atmospheric reentry heat. This is the visual reentry effects implemented in 0.19. However, as of version (1.0) this Reentry effect has heating too, hence the heat shield. Make sure your ship is facing retrograde until the orange glow disappears, otherwise the heat shield will be useless. Do however note that the aerodynamic drag itself may be strong enough to tear apart flimsy spacecraft and especially spacestations. 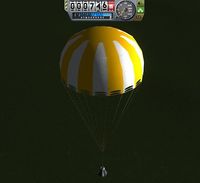 Wait until you reach a speed of about 250m/s (it will turn green in the staging bar) before you activate your parachute.

When the capsule has touched the ground, you can let Yuri exit the capsule by clicking on his portrait and then clicking on "EVA" (Extra-Vehicular Activity). Now you can walk around the landing area and pose in front of the capsule for some press photos. 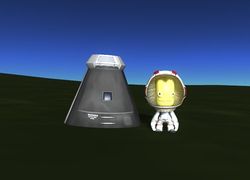 So where is my parade, comrades?

Now you can go to the next level and learn advanced orbital maneuvers: Extra-vehicular activities and docking.