The Astronaut Complex at Kerbal Space Center provides a listing of all current kerbonauts and the option to hire kerbals who wish to become Kerbonauts and fire existing ones.

In career game mode the maximum number of hired Kerbonauts depends on the level of the building. The basic level allows only 5 Kerbonauts, upgraded to the second level allows 12, and allows Kerbonauts to go on EVA. The fully upgraded building has no capacity limit. 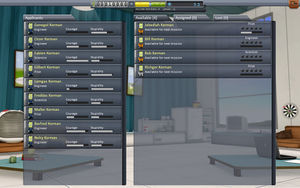 The left panel lists Kerbal Applicants who can be hired. They can be employed by clicking on the green check-mark (✓) that appears by hovering the arrow on them. Kerbalkind provides an inexhaustible supply of applicants, though exiting and reentering the Astronaut Complex may be necessary.

The right panel shows hired Kerbonauts listed in three tabs. The first tab lists hired personnel Available for missions. It is possible to fire Kerbonauts without terminating them by clicking on the red x on each one's bar. The second lists crew Assigned to current missions with the craft or EVA status. The last lists Kerbonauts Lost during a mission; by default, lost crew are Missing In Action and will reappear after a time, but there is a setting to make lost crew remain dead (K.I.A.).

On the Applicants list, each Kerbal has a meter that shows their levels of Courage and Stupidity; they also have a hidden flag that determines if they're a “badass”. These personality traits only affect the Kerbal's facial expressions and gestures during EVA and IVA, and have no real effect on gameplay. These traits are still visible on the popping up (hovering on the bar) window of the hired ones. The hired kerbal's experience, level, and skills are shown on these tabs, which do have gameplay effects.

In career mode, hiring applicants requires Funds, at a quadratically-increasing rate for each additional hire. The formula for hiring cost is 150n2+12350n, for the nth hire. Note that the Original four are already hired by default, so n begins at 5. Depending on the upgrade level, only a certain number of Kerbonauts can be hired, but rescued Kerbonauts will still join the roster even if the limit is reached.

The Astronaut Complex is a single, roughly six-story tall building constructed symmetrically as a westward-facing semi-circle with a small extension in the middle of its east side. Its front lawn to the west is highly manicured and focused on a flagpole.

Spoiler: Fun to discover on your own