Because of the extreme difficulty concerning any return attempt from Eve, I have decided to write a separate tutorial.

Despite being the closest planet relative to Kerbin, it is extremely difficult to get a lander back into orbit around Eve. Additionally, you must overcome Eve's large gravity well in order to successfully return home, requiring even more Delta-V. As a result, many Kerbals have been lost in attempts to investigate their distant neighbor.

Though getting your crew home from the surface of Eve is extremely difficult, it's not impossible.

Additionally, you will need a good understanding of orbital mechanics (see Tutorials section), angles, and a lot of patience. Some knowledge about aerobraking and Advanced Rocket Design might also be useful. Ships described below don't feature launch vehicles, so any experience in building them is desired.

It's a kind of interplanetary expedition rather than a simple round trip. In my opinion the easiest way is to send a lander without crew and return a rocket with 2 Kerbals. They'll meet for the first time in Eve orbit, then one daring pilot will take a seat in the lander and fly a historic mission!

The ascent rocket will use asparagus staging (see Tutorials) with Upper and Middle Stage in a core and multiple Booster stages grouped in pairs. 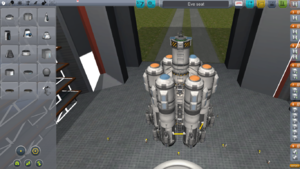 Tutorial's example rocket including probe and some electiricty equipment

This stage has to get above the atmosphere and accelerate itself to orbital velocity. It's important to keep it as lightweight as possible. First choose a command pod. The best idea is to put a single Kerbal in a EAS-1 External Command Seat. Next (but much worse) would be the Mk1 Lander Can. I recommend the first option and a following stage design:

Warning: the above rocket is doomed to fail as of 1.0 due to the new aerodynamics. A rocket will get much farther if it has a Nose cone or a more aerodynamic command pod (such as a Mk1 Command Pod or even a heavier-but-pointier Mk1 Cockpit).

This stage will propel the ship through middle atmosphere (20 km - 35 km). Its engine should be activated with all lower stage boosters and fed from their tanks:

There are two possible ways to build them. One is to use 2x FL-T800 Fuel Tanks and a LV-T30 "Reliant" Liquid Fuel Engine. Second is a FL-T400 Fuel Tank, FL-T800 Fuel Tank and a T-1 Toroidal Aerospike "Dart" Liquid Fuel Engine. They have very similar performance but I think aerospikes are better because they lower the ship's drag coefficient. A potentially better design could employ 3 pairs of aerospike boosters attached around the core stack.

You may also need parachutes and landing gear.

As of version 1.0, one can launch and land the landing rocket with empty liquid fuel tanks, a Convert-O-Tron 250, a 'Drill-O-Matic' Mining Excavator, and an electric power source. The latter three can be used to fuel the ship after landing and then left behind on Eve's surface. This greatly reduces the weight of the upper stage for the first part of the mission, although ascent from Eve is still equally difficult.

If you want to send a lander alone to Eve, add a probe somewhere.

Although it's not very challenging to send the lander in one launch, it may be easier to split the ship into two parts. First there will be the lander itself with a decoupler below the center engine and a Clamp-O-Tron Docking Port Sr. (remember about struts). The second part could be a simple Rockomax Jumbo-64 Fuel Tank and a couple of (for example 4) nuclear engines with this big docking port on top. Last thing to do is to launch them into Kerbin orbit, then dock and send them to Eve. To dock together they'll of course need some RCS.

Assuming that we sent the ascent rocket alone, the return rocket could be as simple as this:

Such rocket has a Delta-V of almost 6 km/s which is enough for departing Kerbin's orbit and Eve capture, rendezvous with ascent ship and then return to Kerbin.

The example lander has a Delta-V of about 11 km/s. Now it all depends on the landing site elevation (the higher, the better). To find a suitable place you can send some scout probes or even better - a rover. With this type of design, to calculate the needed Delta-V you can use results from my tests:

That leads to an inaccurate rule of thumb that every km lower, adds 700 m/s to the needed velocity change. Although I managed to return from 555 m having only 11.3 km/s (with a different design), with only 3 pairs of boosters we should not land below 3 km, just for safety.

Once you got in a stable orbit around Eve, you can meet with your return ship and transfer a pilot to the lander (via EVA). Then using the transfer stage to deorbit the lander to the chosen landing site and then detach it. During descent, get rid of the bottom docking port (if used). When below 20 km open the first pack of chutes - the Mk25 Parachute. To reduce stress wait until the 'Drogue' chutes are fully deployed, and then open the first half of the radial chutes. Once they deploy at 500 m, open the rest. If it seems you'll land faster than about 6–8 m/s you can make a slight burn prior to the touchdown. When on the surface, you can detach all those parachutes.

Before attempting to takeoff - a quicksave.

Now throttle up to 100%, detach the landing gear, and as-quick-as-you-can point the rocket straight upwards and turn on SAS. If failed to do so, the rocket sooner or later will flip. This will also happen if you try to move it before dropping all those boosters. The only thing now is to drop the spent stages and maybe control your velocity trying not to exceed terminal velocity (see Eve#Atmosphere).

Start your gravity turn between 30 and 35 km with ~70deg of pitch - at this time, your ship should be running out of fuel in the Middle Stage. When your apoapsis raises above 80 km you can pitch down to ~20deg and keep looking both on fuel and apoapsis.

Once having the apoapsis above the atmosphere (~100 km), cutoff the engine and plan a maneuver to circularize your orbit.

Now if you managed to return from Eve surface, rendezvous should be piece of cake. You can either adjust your return ship's orbit to make a rendezvous or fly with the lander (if you have some fuel left). When the distance falls below 1 km or less, you can EVA the lander pilot to return to the ship (after bringing relative velocity near to 0).

Interplanetary Transfer back to Kerbin

Delta-V needed for returning to Kerbin is:

So exactly 1800 m/s would be suitable (the presented return rocket has much more). Calculations are accurate when planets are properly aligned - Kerbin should be about 36 degree ahead of Eve (for details see http://ksp.olex.biz/).

After ~42 days, the most daring adventure will end up with reentry and a safe splashdown.

This could be called 'direct ascent'. Although much more complicated, it's possible. After all, it all matters of how many hardware we can bring down to Eve's surface.

You can use the rocket from the first method. Now you would use the Mk1 Lander Can with a parachute on top and the Upper Stage must have 1800 m/s left after the ascent. That means the lander should use 6 pairs of boosters, and this allows for landing about 5 km above sea level.

It may be tempting to use the IX-6315 "Dawn" Electric Propulsion System since it's far more efficient and solar panels produce more energy on Eve. But the ejection burn will occur on the night side and could last about an hour.