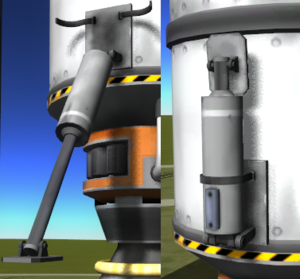 The LT-2 Landing Strut is primarily used to land safely on celestial bodies. Prior to its introduction in 0.14, winglets were often the preferred method of providing landing legs for Mün missions.

The LT-2 Landing Strut is used as a support when landing vertically, or at least attempting to. It is connected radially and extends with the G key (default). It extends much farther than its smaller cousin the LT-1 through a unique telescoping action, making it suitable for landers with larger engines.

Although comparatively long, LT-2 landing struts still need to be placed low on a rocket. They extend far enough to be used with the Poodle, LV-T30, and LV-T45 Liquid Fuel Engines, but cannot reach past the LV-N or Mainsail. A workaround to this is using girders, I-beams, or panels or just simply using the offset tool to place the landing leg lower on the rocket. You can check if it will clear the engine by moving your lander in the VAB so that its landing legs just touch the ground. Do be aware, though, that all landing legs have suspension and will get slightly shorter under heavier rockets.

LT-2 Landing struts can be set to be either extended or retracted at launch. This is done by right-clicking the part in the VAB or SPH and clicking the relevant button. The landing struts can be toggled in flight with the G key or hitting the “extend gear” button on the HUD. While in motion the legs can produce substantial forces, potentially resulting in a several meter “hop”. If the leg collides with another part of the rocket, it can break connections and push that part away.

The maximum safe landing speed for an LT-2 landing strut is ~12 m/s. Landings with massive rockets or on rough terrain may need to be slower to avoid ripping off landing legs.

Each LT-2 leg can support 50 tons in Kerbin's gravity when sitting still. Each leg can absorb a gentle landing impact for an 11 ton load.

In the current version, it is possible to lock the suspension.

With the advanced tweakables enabled, there are two settings for the landing leg: spring and damper. It depends on the gravity of the landing site, but also on the mass of the ship.

In general, to prevent a ship bouncing around, set the damper higher than springs, maybe even crank up damper strength.