The Clamp-O-Tron Sr. Docking Port is a port used for docking of two spacecrafts. 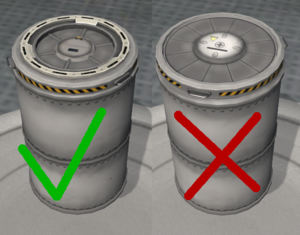 The left one can dock while the right is docked to the fuel tank.

Due to its large radius it provides a much more rigid connection than the small-sized Clamp-O-Tron Docking Port resulting in a lot less wobble. This makes it the preferred choice for docking very large and heavy vessels. Unlike the smaller docking ports, The Clamp-O-Tron Sr. cannot be mounted radially. Otherwise it is functionally identical to all other docking ports but much heavier.

Note that in order to dock two spacecrafts, both must be equipped with docking ports of equal size. When constructing a spacecraft, another part which is not a docking port can be placed on it. That part can then be undocked, but not redocked.

The strength of docking ports is hard to determine. In real life the strength of a docking port is depended by many factors, basically if you are folding the connection or just pulling it. But who cares about real world here?

The different sizes of Clamp-O-Tron ports (standard, Jr. and Sr.) will not connect to each other.